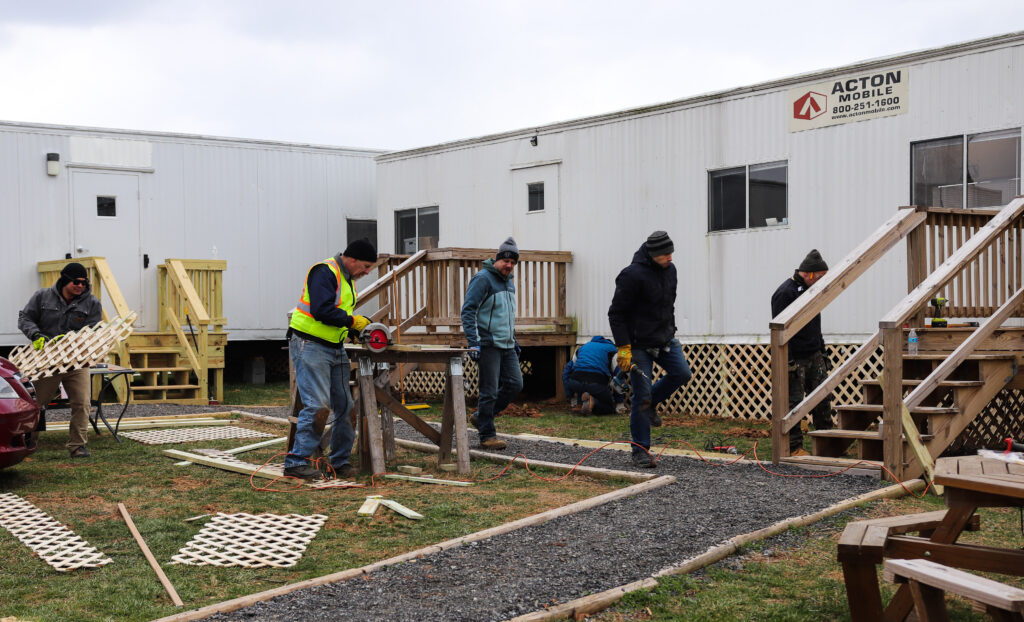 Armed with shovels, rakes and brooms, and bundled in layers of clothing to combat the cold and wind, more than 100 community volunteers from the Boyds, Maryland area and well beyond, participated in Warrior Canine Connection’s (WCC) Community Clean-up Day to help with tornado damage repair efforts this past Saturday.

The event, the first of its kind for WCC — and hopefully its last — was set up after a tornado touched down on its Healing Quarters on Friday, February 7th. The storm caused significant property damage, including the destruction of several structures on its grounds but, thankfully, no people or animals were hurt in the storm.

“It’s amazing to see the outpouring of help here from volunteers in our community,” said Rick Yount, executive director and founder, Warrior Canine Connection. “One of the amazing things is that we have a lot of engaged volunteers and staff that are not only willing to help inside our facility but also outside of it; we are so appreciative of their efforts.”

With heavy machinery clean-up work complete, volunteers were enlisted to help with projects including rebuilding/repairing structures, mending and repainting fencing, assembling new furniture, regrading and reseeding grassy areas, among many other projects.

Volunteers were divided into teams to assist with each project. David Burnett, a Navy Veteran and WCC volunteer, served as a project leader for the lattice repair work for two of the trailers used for training and staff workspace damaged in the storm. No stranger to WCC, David regularly volunteers around WCC’s facility and in the training center but said when he learned of information for the first WCC Community Day, he jumped on board.

“I’m pleased to be part of this effort, and we’ve got a great bunch here — there’s a lot of enthusiasm, a lot of skill and everyone is willing to pool their knowledge to figure out the best way to complete this project,” said Burnett.

In total, participants donated 545 hours of volunteer service during Saturday’s event. In addition to those that donated their hard work and labor, numerous more contributed to the day’s success by cooking and dropping off items to fuel hungry stomachs.

Many supporters and volunteers have also helped from afar since the tornado touched down; to-date more than $25,146 has been raised in donations to help with the repair and new construction at WCC. The February 7th storm further underscores the importance to push forward on the renovation and construction of the Healing Quarters to ensure we have a safe, permanent building for staffing, training and running operations.