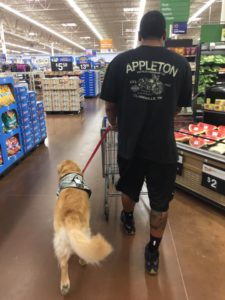 If you follow many of the WCC service dog teams on Facebook, you may be familiar with the handsome and talented Levi — a Golden Retriever from Holly’s Half Dozen litter. He can be seen in videos saying his prayers, playing dead and even snuggling with his best pal and family pet, Abby the hamster. But what isn’t always readily apparent online is the love and support Levi gives his owner, Wesley.

Wesley, an Army Veteran, served four deployments between 2005-2012. It was on his fourth deployment in Afghanistan that Wesley sustained a traumatic brain injury that forced him to medically retire.

“I was never an animal person but, while at Fort Belvoir, I got involved in WCC’s service dog training program and Levi just grew on me,” said Wesley. “He ended up becoming my service dog because of the bond we built, and he’s my best friend — he makes me happy and makes me laugh. He distracts me when I’m down and helps to put me in a better mood.”

Leah, Wesley’s wife, says while Levi isn’t a “cure” for Wesley’s TBI, he is a welcome distraction, assistant, confidant, at-times comedian and consistent comfort in all of their lives.

Veterans with Legal Issues in San Francisco Complete Service Dog Training with... More than a dozen service animals are paired with veterans for support
Scroll to top