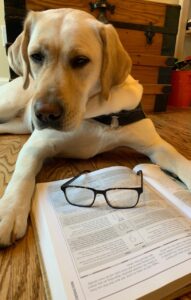 You’re staying at home and inside as much as possible — doing your part to help flatten the curve. Looking for some good ways to occupy your time? Look no further! We tapped our Warrior Canine Connection team to share some of their favorite dog and Veteran-inspired book recommendations to help you pass the time. Read lots and be well!

Jennifer Wilder, Director of Development
Recommendation: Made for Each Other by WCC’s own Meg Olmert

“I love Made for Each Other because it was the first book to really dive into the roots of humans’ connection with animals, and the chemistry behind how those bonds are formed. Authored by WCC’s own Meg Olmert, the book really helps explain the science behind what WCC hears all too often—that dogs are good medicine!”

“So many books I’ve read are geared towards how you can get the most out of a dog and your relationship — it’s often one–sided. This book focuses on how both a person and a dog can learn from each other in a give–and–take relationship. There share a lot of interesting stories and experiences.”

Recommendation #2: Tribe by Sebastian Junger
“Obviously working with Veterans, I am always interested in new perspectives about the prevalence of PTSD during modern times. Tribe focuses more on how the community someone is a part of might impact their experiences or how they process those experiences versus just focusing on the person alone. Especially during these times of social isolation and uncertainty of the future, I feel it is more important that we come together as communities or tribes and support each other so that we can all get through this together.”

“This is the most amazing book about a prisoner of war. This is not a boring history book — it’s about a hero who became a POW on day two of the war and he shares his story until the time he was released nine years later. Even if you aren’t a history buff, you will still be engaged and amazed. One last thing, this hero lives here in Montgomery County, Maryland.”

“I chose this book for the sake of not being serious and needing a little cute comedy, plus, I have the same name as Clifford’s owner, Emily Elizabeth.”

Recommendation #2: Ashley’s War: The Untold Story of a Team of Women Soldiers on the Special Ops Battlefield by Gayle Tzemach Lemmon

“This particular story is of a high-charging female soldier who led with honor and mission-first mentality. While she lost her life, her legacy lives on. Side note: I do her CrossFit workout every year and visited her memorial at Madigan Army Medical Center in Tacoma, Washington.”

Rick Yount, Executive Director & Founder
Recommendation: “My favorite dog-related pick is “Meg Daley Olmert’s, Made for Each Other, the Biology of the Human Animal Bond. Meg’s book cracked the code and drove the science regarding Oxytocin’s role in the healing power of dogs.’

“My favorite Veteran-related books is Sergeant Back Again by Charles Coleman. It is referred to as, ‘The Vietnam War Novel that made PTSD real.’“

“I recommend any book by author Jon Katz. He has written multiple dog books, and I’m sure you’ll love any book that you pick up by him! His books are filled with humor, compassion, and a deep respect for our canine companions.”

A few other favorites on Alison’s list include:
Marley & Me by John Grogan
Call of the Wild by Jack London
White Fang by Jack London
Old Yeller by Fred Gipson
Where the Red Fern Grows by Wilson Rawls
The Art of Racing in the Rain by Garth Stein
James Herriot’s Dog Stories

“These two books were really helpful when I first started at giving me context and finding a place to start in the military culture. One more that’s much lighter reading, is Grunt: The Curious Science of Humans at War by Mary Roach. It’s just fun to reach and give me a chance to be a nerd and learn stuff in an approachable format!”