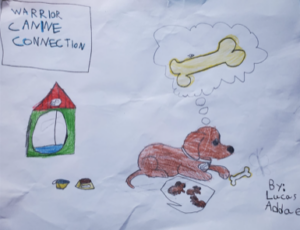 Most of us know Warrior Canine Connection’s most recent puppies as Diamond’s Litter. After learning about the WCC puppy cam on Explore.org, kindergarteners at Harlem Village Academy in Harlem, N.Y. began watching them almost daily during their classes. They even created their own nickname for the litter: The Seven Dwarves. (Yes, Diamond’s Litter has seven puppies.)

The Harlem Academy class of 25 has been, like most classrooms around the country, learning virtually for months now. Holding a kindergartener’s attention can be challenging under even the best of circumstances, so just imagine teaching more than two dozen kindergarteners virtually.

That’s precisely what co-teachers Hannah Tejeda and Galila Ahmed at Harlem Village Academy have been doing since March. Both Hannah and Galila were in search of lessons that would capture their students’ attention span, be visually pleasing, fun and engaging. That’s when they stumbled on the WCC puppy cam on Explore.org and introduced it to the class. They posted links to the puppy cam on the students’ Google Classroom, where students and parents access their daily lessons. And now, it’s become part of their daily routine.

“The first thing the kids do each morning is check on the puppy playroom and the nursery,” said Hannah. “It’s been really fun to take in their thoughts. Everything they say to me is very quirky and funny because of their age. When all the puppies are sleeping on top of each other, the kids always make comments like ‘get your foot out of my ear’, ‘how are you sleeping like that — isn’t that uncomfortable?”

Hannah says watching the puppies isn’t just about fun and games, it’s also been a great lesson in age and development.

“The class decided that when they first started watching the puppy cam, the puppies were in pre-school,” said Hannah. “After several weeks, they decided they look like third–graders. They make lots of comments on how quickly they’re growing.”

Last week, each pup in Diamond’s Litter has since been placed with their new puppy parents, WCC volunteers who will care for them during their training for up to the next two years.

Hanna says she is grateful that the puppy cam is available to help entertain, educate and touch the hearts of their students. She says they’re also looking forward to watching WCC litters in the future.

“As an adult, my co-teacher and I really appreciate what the organization is doing,” said Hannah. “I’ve had service family members and I think it’s an awesome way to show what you’re doing by using the webcam. It’s really cool because it’s providing an inside look on something we normally wouldn’t have insight on.”

Check Out The Puppies In Training That Have Become A Virtual Hit | Nightly News:... WCC Unleashed
Scroll to top