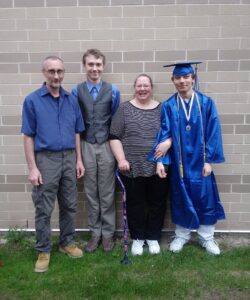 It was eight years ago now. Stacey Rumptz was at her local library using one of its computers. She landed on a website that had an ad to “watch puppies.” A dog lover, she clicked on it and was instantaneously hooked.

“There were these six puppies and this mom, and she was so good with these puppies,” said Stacey. “They just made me smile… I wasn’t even petting them or holding them but the next day, I had to get back on that camera, I don’t know why, but I had to see the puppies.”

That was Holly’s Half Dozen, Warrior Canine Connection’s second-ever litter of pups back in 2012. (Rain’s Patriotic Pups Litter was the first.)

At the time, Stacey, her husband and their two sons had just moved from Detroit, Michigan to Green Bay, Wisconsin. Although the move was made for cleaner air, wider spaces and a better quality of life, with no friends or family locally, Stacey felt like her walls were closing in around her. She never thought — not for one second — that she would find solace in a website full of puppies.

“It was the best click on a computer that I have ever made in my life,” says Stacey. “It has opened up so much for me in the way of friendships, happiness and support when I lost my own pup. It’s just knowing that these pups are going on for greater things to help the Warriors who have defended our country, our way of life.”

While she says the mission and puppies, of course, are what drew her in, she found much more than that on the site.

“At first, I just watched and read the chat thread on the site,” says Stacey. “Someone made a comment, I can’t remember what it was, but I posted… and it was the beginning of some really good friendships. I found myself sharing on the site and talking with people who helped me through some really tough times.”

But it’s not only the friendships, Stacey also credits the site for helping to deepen her relationship with her own sons. Both of her boys have ADHD and Asperger’s Syndrome, so finding things that hold their interest and that they enjoy is challenging.

“When they were younger, the kids would watch and count the pups in the litter, call out each of their names by their colors,” said Stacey. “And when they learned that each dog was named after actual people, they became really hooked and would read all of the name announcements.”

She adds with a laugh, “My son could tell me the names of each of the litters, but could he clean his room? No.”

Life has changed a lot since then. The boys are grown and are preoccupied with other interests. Stacey has a full-time job supporting a trucking service, which has become very busy with the current demand on our trucking and shipping industry due to COVID-19.

Stacey still routinely tunes into the puppy cam and chats with her fellow Extreme Puppy Watchers (EPWs), a tight-knit group of people who follow the WCC puppy cam. She says she hopes to one day make it to a WCC graduation and meet Molly Morelli, WCC’s director of dog programs.

She says “I will always be in debt to Rick and Molly for allowing us into their living room and their lives. From that one webcam, a blue bear bed, and a whole lot of wonderful people, WCC is something VERY special to me.”