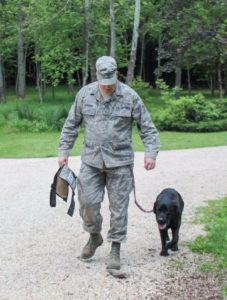 WCC is on a mission to make a real difference for our nation’s wounded Warriors so that they may live the fullest life possible. In the following interview, USAF Veteran Ryan shares the journey that led him to his canine partner, Luke. Ryan’s experience with WCC gives a true sense of how service dogs impact the lives of our Service Members and Veterans.

How did you learn about Warrior Canine Connection, and what appealed to you about the program?

While working at Walter Reed National Military Medical Center, my wife Julie (who is a board-certified music therapist) was introduced to Rick Yount, Executive Director of WCC. During this time she learned about WCC and would always talk about visiting the dogs in training at the end of the day. At the same time I was admitting to myself that I did have PTSD and needed help.

After a few months in to treatment doctors placed me on some medication that altered me in ways I did not like. Julie suggested I look into the program, since I am a dog lover. After spending a couple of days thinking about it, I took her advice and put in an application because I needed an alternative to medication.

How open were you to the idea of a canine partner?

I was not skeptical, as I have seen the positive effects of dogs helping people. In fact, Julie connected some of our family’s friends who were in need of a military family support dog to WCC. Seeing the positive changes that Cadence (who is now a full-fledged service dog with public access) brought to the Service Member and his family, I knew that this was a good idea.

Once you were involved in the WCC program, how long did it take before you were partnered with Luke? What was the matching process like?

It was approximately two years from the time I began the application process (June 2014) to having Luke live with us (February 2016). In February 2015 I was interviewed by WCC Service Dog Trainer Danielle, who told me based on my needs (PTSD and mobility issues due to lower back injury) that I would need a large male lab, a dog WCC had few of at the time.

For the first year, I went to WCC’s puppy enrichment center (PEC) four times to pet new puppies and visit. The second year I started going once a month to meet with Danielle for training sessions where I learned commands and worked on timing. After four months of that, I started going to the PEC weekly where I worked with approximately 12 dogs in various stages of their training. One of those dogs was Luke. In fact, I was there the week Luke returned from his training in Menlo Park, CA.

The first time I worked with him was a very good, relaxing day. He was listening to everything I said and was very well mannered. I went home and told Julie about Luke – the cool dog I worked with that day. That Sunday I told Cadence’s family about Luke – coincidentally, they had met Luke that week as well after a training session with Cadence.

For the next few weeks, I worked with other dogs and Luke every once in a while. Training sessions always seemed easier and more relaxing with Luke. In December, I received an email from WCC saying that Danielle wanted to meet with us before we trained that day. When I arrived trainers shared that Luke and I worked really well together and that we were a match! And after some advanced training together, Luke would be placed with me! We increased our training to two days a week.

The first week of February 2016, Luke became my service dog, and I became his Veteran.

Was the adjustment of having a canine partner easy or did it take a while to find a comfortable routine? Was it complicated for you to have a canine partner so involved in your day-to-day life?

I think it was an easy adjustment having Luke with me. For the first two weeks he was always tethered to me at home and at work. During this time we remained at home, away from public areas as this made the bonding process very easy.

When I found out I would be receiving Luke I went to my command, and asked if it was okay to bring Luke to work. I was routed up the chain and within two days I was informed that it would be fine. Everyone at work was supportive and for a month people asked “When is your dog coming?” When Luke finally came to work, I did not see it as a big deal. However, now almost everyone from shop looks forward to Luke coming in.

In terms of recovery/well-being, how important is Luke? What do you think that journey would look like without your canine partner?

As a result of three deployments to combat areas, I have struggled with depression, anxiety, anger, suicidal thoughts, and lower back pain and numbness in my right leg. Since Luke has come into my life, I don’t feel as depressed or as anxious. On any given day, Luke responds to my anxiety by nudging my leg and/or physically positioning himself between me, and the person I am interacting with.

My attention shifts from the situation to Luke where I can reward him for letting me know I am getting anxious. He is helping me to become more self-aware at work and at home. This is SO HELPFUL in my recovery process. Since Luke is a large dog, he helps me stand from seated positions, which was an unfortunate struggle before Luke came into the picture.