Spring 2015 – On any given weekday, it’s not unusual to see recovering warriors at the National Intrepid Center of Excellence (NICoE) in Bethesda, Md., engaged in a mission that will transform the lives of their fellow veterans with disabilities. A quick look inside the Warrior Canine Connection (WCC) program once there reveals the heart of the mission, an assortment of young Golden and Labrador Retrievers with bright eyes, eager smiles, and wagging tails.

Read the full article from The Virginia-Maryland Dog here.

He has helped hundreds of servicemembers suffering from PTSD. He works at Walter Reed National Medical Center in a Navy camo harness. His title? Animal co-therapist.

Ron is a 3-year-old yellow Labrador retriever — a facility dog who works at Walter Reed and the National Intrepid Center of Excellence in Bethesda, Md. The Department of Defense Institute is dedicated to studying and healing servicemembers with traumatic brain injury and psychological issues.

Read the full article, and view the photographs and videos here.

February 18, 2015 – WASHINGTON — When Lt. Tommy Faulkenberry came home to his wife and four sons in 2012, after 12 years at sea with the U.S. Coast Guard, he found his transition to civilian life especially difficult. He had contracted a rare form of muscular dystrophy, and as the physical toll on him mounted, depression, anxiety, and prescription drug dependence followed.

View the video and read the article here.

November 24, 2014 – Can a furry, four-legged creature really help save a life? Many wounded warriors and their spouses say, “yes.” 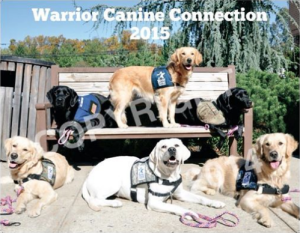 The 2015 Warrior Canine Connection Calendar is now available for purchase. Each year, WCC features all of its program dogs in its annual calendar. These calendars make great holiday gifts, and will be shipped in time for Christmas. You can also choose to donate a calendar, which will be given to one of the Warriors who work with WCC dogs at one of our training locations. 100% of all the funds from the sales of calendars go directly to WCC to help wounded Veterans. 2015 WCC Calendars are available in the WCC Store.
https://warriorcanineconnection.org/wp-content/uploads/logo_white.svg 0 0 WCC Comms https://warriorcanineconnection.org/wp-content/uploads/logo_white.svg WCC Comms2014-11-12 15:32:522021-04-02 02:02:402015 WCC Calendars for Sale

October 27, 2014 – Solid Gold Pet and the Solid Gold Foundation have developed an exclusive alliance with Warrior Canine Connection (WCC), a national nonprofit organization that enlists recovering warriors in a therapeutic mission of learning to train service dogs for their fellow veterans. Read the full story at Pet Age.

But seeing his dog Gabe ease the anxiety of an 11-year-old boy who was leaving his mother and moving into foster care gave social worker Rick Yount an idea.

That led Yount and Gabe, a pup given him by friends who had fought in Operation Desert Storm, to embark on the golden retriever’s work as a certified therapy dog.

Twelve years later the gift came full circle when Yount started a program using dogs like Gabe to help veterans recover from the psychological and physical wounds they suffered in war.

Read the full story at the Frederick News Post.

June 26, 2014 – For dog lovers, it’s an absolute: The unconditional love of a canine companion heals the soul, reaching into the heart to cross canyons of loneliness and despair.

Military researchers now are trying to learn if there’s real science behind that semimystical link — and if so, whether it can help treat the signature wounds of the Iraq and Afghanistan wars.

A $5 million study is underway at the Walter Reed National Military Medical Center in Bethesda, Md., to evaluate whether and how training service dogs may help patients with traumatic brain injury or post-traumatic stress disorder.

Participating troops are paired with puppies that they will raise for two years to serve as assistance dogs for other injured veterans.

Anecdotal personal stories aside, a handful of studies have suggested that working with dogs releases oxytocin, the feel-good hormone that promotes bonding. The new research seeks to quantify these observations.

“There’s not a lot of information. … It’s hard to conduct randomized, controlled trials as to why some people benefit,” said Navy Capt. Robert Koffman, a psychiatrist contributing to the study as part of his job at the National Intrepid Center of Excellence in Bethesda.

The research is modeled on a program started five years ago at the Veterans Affairs Palo Alto Health System in California.

Rick Yount, executive director of the nonprofit Warrior Canine Connection, which breeds golden and Labrador retrievers to become service dogs, said the program succeeds by combining the power of the human-animal bond with the “warrior ethos” of helping brothers-in-arms.

Being in need of mental health treatment is “contrary” to how combat troops see themselves, Yount said, “but tell them you need volunteers to help train service dogs, and a lot of hands go up.”

The study involves at least 40 service members, half of whom will train dogs.

The research will follow participants through the program, examining physiological responses — such as heart rate and stress markers — as well as any psychiatric changes before, during and after the study period.

If the results are anything like what Palo Alto has seen, Yount said troops will benefit, and a new crop of hard-working service dogs will be available for injured vets.

“While service members are trying to teach the dog that the world is a safe place, they are, at the same time, working on their own triggers,” Yount said.

The study is the first Defense Department research to examine the interaction between dogs and humans with head injuries or mental health conditions.

A larger, different study is just getting underway at the Veterans Affairs Department, but that research will focus on the effectiveness of trained psychiatric service dogs as well as companion dogs — pets — to ease PTSD symptoms.

On any given day, service dogs can be spotted strolling through the NICoE, Building 62, which houses injured troops, and the America Building outpatient clinics at Walter Reed-Bethesda.

Koffman’s golden-Lab mix, Ron, works as an animal assistance therapy dog, breaking the ice between his handler and patients.

He said the magnetic draw of dogs is one of many reasons they’re beneficial to patients with anxiety disorders, including PTSD.

“When you have a dog in public that’s as irresistible as mine, it’s almost impossible to get anywhere on time,” he said. “It forces a person to socialize.”

The Pentagon is expected to update Congress on the research’s progress next year. Advocates say the results may guide the military, veteran and medical communities on canine-assisted therapy, service dog policies, medical treatment and more.

“But the anecdotal information — just from talking with the service member — is so strong,” she said. “As complementary or alternative medicine, it’s powerful.”

View the clip from Fox News’ The Real Story with Gretchen Carlson.”