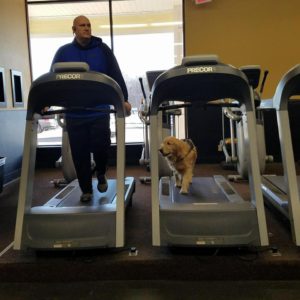 “She makes me more outgoing, more willing to talk to people,” says Sam. “I used to be a real introvert and didn’t want to be around people — was lost in my own head. Because she’s so cute, she attracts a lot of attention, people ask questions, want to meet her and she interests so many — it’s made me much more outgoing.”

Rachael also helps Sam with day-to-day activities that cause him pain due to a back injury while he was in the Army. From helping to brace him as he gets up and sits down in a chair, to picking up items for him, she helps provide relief to Sam on a daily basis.

“We are very attached… my wife refers to her as my second wife — she means a lot to me. At this point, I’d feel lost without her at my side. We’ve been inseparable since we’ve been matched,” says Sam.

In fact, Rachael has become something of a celebrity in Sam’s hometown of Middletown, Connecticut; she not only appeared in a local bank’s poster to promote service dog awareness, she’s also known by name at the stores she and Sam frequent.

“People recognize her almost everywhere I go. Whether it’s Dunkin Donuts, Starbucks, Home Depot or Lowes, they all know her by name. I’m just the guy with Rachael.”