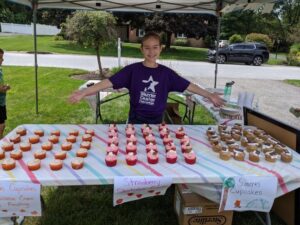 Strawberry shortcake. Red velvet. Pumpkin spice. Those are just three of the six flavors of cupcakes that Addy Albright, 9, recently baked, decorated and SOLD OUT of at a recent fundraiser she hosted for Warrior Canine Connection.

Addy, like her fellow fourth-graders at Sinking Springs Elementary School in York, Pennsylvania, has been doing virtual schooling from home. She says she misses her friends and teachers but due to the pandemic, is making the best of the situation. That includes taking up a new hobby: baking.

“I started with peanut butter cookies; I went on YouTube and found the recipe,” said Addy. “Then I moved on to another cookie, then cupcakes, then brownies. I have tried all different kinds of recipes. I don’t worry about perfection; I just enjoy making them.”

After dozens of different recipes, Addy got the idea to turn her love of baking into a fundraiser for Warrior Canine Connection. She created a Facebook event and invited family and friends to come by her house to purchase cupcakes during a three-hour window one day over Labor Day weekend.

Not only did she sell out in an hour, she raised $425 for WCC in the process.

“I wanted to raise money for a group and I had a couple of options, and I liked the Warrior Canine Connection best because I like dogs and because Emily (one of WCC’s trainers) works there and she’s part of our family,” said Addy.

As you might imagine, baking six varieties for a total of 130 cupcakes is no small feat for anyone, let alone a 9-year-old, novice baker. You might assume she had some help, right?

“Mom is not the baker,” said Amanda Albright, Addy’s mom. “I just make sure the kitchen stays in one piece; I am not the baker, that’s all Addy.”

Addy baked all 130 cupcakes the day before the fundraiser. Then the day of, she got up at 5 a.m. to make the icing and decorate each one; it was a five-hour labor of love.

And as Addy’s mom, Amanda, will tell you, the experience was also a larger life lesson for her 9-year-old daughter.

“She told me, ‘You know Mommy, I really feel proud of myself,’ and it felt good as a mom to see her accomplish something she put her mind to and that she was doing something to help others,” said Amanda.

Addy says she plans to host a second fundraiser for WCC, likely around April 21st to coincide with her 10th birthday. Whether she’ll bake cupcakes or cookies is still to be determined.

Want to try one of Addy’s favorite recipes? This pumpkin cupcake with pumpkin spice cream cheese is from the Love Bakes Good Cakes blog and is one of the six Addy made for her fundraiser.

“I like the pumpkin flavor and while they are baking it smells so good in the kitchen. Pumpkin cupcakes remind me of fall and that is my favorite season,” said Addy.