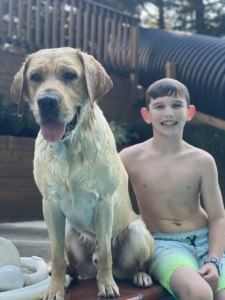 Warrior Canine Connection (WCC) is proud to observe National Military Family Appreciation Month — a time to recognize and honor the sacrifices military family members make while supporting their servicemen and women. Our programs, which serve Service Members and Veterans, all directly benefit from the contributions of military family members as staff, Puppy Parents and volunteers.

WCC’s No-Fail Mission not only pairs service dogs with Veterans, but it also provides support to Veterans and military family members through the placement of its Military Family Support Dogs (MFSD). The Bell family is one of many who has received a WCC MFSD earlier this year. And as they told us, they can’t imagine their lives without Hullett, a lovable yellow Labrador Retriever.

A family of five, the Bell family is always bustling; kids are seemingly always running to sports, extracurricular events and friend’s houses. There’s Myla, 14; Macie, 12; Branson, 10; Amy, also known as “mom;” and Michael, aka “dad,” U.S. Marine Corps Major in his 22nd year of active-duty service. So as Amy told us, they were curious how Hullett joining their family might impact their routines.

“He [Hullett] is the missing piece we never knew … he’s a just the best, we can’t imagine life without him now, he’s involved in our everyday decisions of what we do, where we go, and if he’s coming with us,” said Amy Bell. “Our family dynamic has changed for the better. With such a busy household, he has actually helped bind us, taught the kids responsibility through their chores and, of course, he provides tons of fun and is always giving us something to talk about.”

Hullett initially went through advanced training but based on his strengths and skills, WCC trainers found him to be a better fit as a MFSD. Trainers describe him as a smart, driven boy who loves to cuddle and be surrounded by people.

When it came to being paired with a dog from WCC, neither coat color nor gender mattered to the Bells, Amy said their only pre-requisite, which was her specific request, was “my dog must love the water,” (said with a laugh). Mission complete: Hullett spent his first summer with the Bell family enjoying the backyard pool.

Hullett is named after Army Sergeant First Class David W. Hullett, Retired, who dedicated his life to serving his country and others in need. During his military career of 21 years, he was deployed to Asia, Europe and Africa, including a very challenging humanitarian mission to Somalia in support of Operation Restore Hope. Upon his return from Somalia, Sergeant First Class Hullett and his family moved to Panama where he provided support to Operations Safe Haven and Safe Passage while assigned to the Jungle Operations Training Center.

Amy says being a member of a military family, the namesake is super special and loves when people ask about his name and sharing information about David and his service. Learn more about the Bell family here.