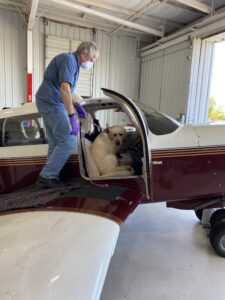 It’s not all that uncommon to see a service dog accompanying its owner on a flight. But it’s not every day that a dog gets its very own privately chartered flight. That’s precisely what WCC’s Calli recently got, thanks to a spectacular volunteer, Mark Horton.

Calli, a WCC military family support dog from the Welcome Home Litter who was paired with his military family earlier this year, recently had some health issues that required some specialized medical care. The problem? He was in Memphis, Tennessee and WCC’s veterinary team is in Sandy Spring, Maryland.

It just so happens Mark, who is a Veteran himself, lives next door to one of WCC’s team members who told him about the situation. That’s when Mark happily agreed to get Calli where he needed to be via his personal four-seater plane.

“There are two types of pilots — a pilot who flies because it’s a good job and the others who fly because they love it,” said Mark. “I often look for an excuse to fly and this was a good one — it was a win-win for everybody.”

A civilian pilot part of his career, Mark says he “got distracted” and ended up going to the military medical school as a naval officer and then he took a position with another commissioned uniformed service that took him to the Indian Health Service where spent 32 years as an eye surgeon.

In his role, Mark often found himself in remote locations where Native Americans didn’t have access to specialty healthcare. He convinced his leadership team to start a small flight department so he could help get physicians and specialists in and out of the area to help provide medical services that otherwise wouldn’t be available.

Mark served as the chief pilot of the flight department for 15 years and recently retired from medicine. Clearly, having spent most of his life helping others isn’t just a job for him, but a way of life.

“I don’t need much excuse to go flying since I retired from my federal job,” said Mark. “Before this, I’ve been around service dogs only on commercial airlines. Calli was absolutely superb. In fact, he was far better than a lot of passengers I used to fly. He was great, he curled up and couldn’t be happier, I was very impressed.”

Calli is back in Maryland, where he’s resting comfortably and in good hands with WCC’s medical team.

We are continually amazed by all that our volunteers and supporters, like Mark, do to help our Veterans, dogs and our organization. Please join us in thanking Mark for going above and beyond to help Calli!