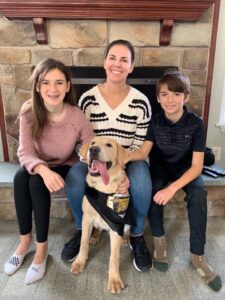 If you follow each of WCC’s namesake announcements, you know that each one has its own unique and remarkable story. All of us here on the WCC team are continually moved to learn about each Veteran and the way his or her family and friends recount the impact they have had on those they knew, as well as our great country.

This month, we’re sharing one of those remarkable stories: Navy Chief Petty Officer David Michael Collins, Ret. You likely know his namesake as service dog in training “Collins”; he was named in memory of Dave, who lost his life to his battle with post-traumatic stress disorder, traumatic brain injury and yet to be diagnosed chronic traumatic encephalopathy in 2014.

Just recently, over Thanksgiving, Dave’s wife, Jennifer, and their two children, Grace, 14, and Sam, 11, had the opportunity to meet Collins. In fact, WCC puppy parent and volunteer extraordinaire Patrick Siemon and Collins drove to Pennsylvania to meet the family while they were in town for the holiday.

“Meeting Collins was so much fun because we’ve seen pictures and we’re such a dog family, so to be able to hug on him, play with him and give him kisses was fabulous,” said Jennifer. “And meeting Patrick was just as incredible because he’s doing all the hard work to turn this dog into someone who’s going to carry on my husband’s legacy — he’s just a very special human being.”

We agree — special indeed. Although Patrick insists the pleasure was all his.

“CPO Collins is a truly amazing hero who has done so much for our country,” said Patrick. “There were so many special moments during Collins’ meeting with his namesake’s family and being able to show CPO Collins’ son Sam how to train Collins was truly remarkable. I hope that Collins brings CPO Collins’ family, friends and fellow Warriors much comfort through his work helping Veterans and sharing his story,” Patrick shared.

In addition to Jennifer, Grace and Sam, their entire family and even Jennifer’s best friend from childhood and her children all came for the coveted Collins meet ‘n greet.

“I know I can speak for the kids when I say that, when you lose your husband or your dad like that, any physical embodiment of him is joyful,” said Jennifer. “And so, Collins might be furry and four-legged, but he still carries Dave’s spirit in him, so for us to be part of his story is really a special honor for us.”

Jennifer says dogs have always played a huge role in Dave’s life. In fact, her letter to WCC accepting the WCC namesake nomination recounts the role a very special dog named Brian played in getting Dave home from work in Afghanistan.

Alyssa,
I truly cannot thank you and your supporters enough for this honor! In addition to being an appropriate legacy for a man who lost his battle with TBI/PTS because the treatment and the answers just weren’t there for us, I want to tell you a story of why a dog is important.

Dave was retired and working as a contractor. In the summer of 2013, he was sent to Afghanistan, not technically his job but they needed him, for a 4-month rotation. He really, really didn’t want to go and these were some of the signs of his struggle. While there, we were able to FaceTime with him. Our dog Murphy had died about a year earlier, and Dave had started telling us about this stray dog there that reminded him of Murphy. It got to the point where he’d FaceTime with us to show us the dog, named Brian. Brian even slept in Dave’s room on his bed — definitely not something that Dave would typically allow.

Toward the end of the trip, Dave made plans for an organization called Nowzad to get Brian home to us. Dave returned in late September, and Brian arrived in early November. When Dave returned home, that is when I really noticed something was wrong. His spiral downward was quick and by March, he was dead, having found no doctor or program or facility that could provide him with any relief.

Alyssa, I truly believe that Brian got Dave home to us. Brian was a connection to us, a bit of humanity in an otherwise difficult place. I know Dave struggled for far longer than those last intense few months and I’m sure the trip to Afghanistan made things worse. We could have lost him to those demons over there. But a dog loved him, kept him company, reminded him of home and eventually got him home safely to our love.

So, a service dog for another veteran in need is so much more appropriate than you know.

Thank you again for giving us this opportunity and for honoring Dave in this manner.

Of course, now that the family has met Collins, Jennifer said Sam has asked multiple times whether they can “adopt him.” Jennifer explained that Collins is training for a much more important purpose but did share that if he were to choose a different career path, they’d love to be at the top of the list for his placement.