We are pleased to introduce you to two new members of WCC’s pack! Join us in welcoming both Cyrus Fenwick, social media coordinator, and Samantha Johnson, development officer, to our team. Learn more about our new team members below. 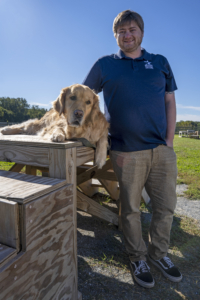 Cyrus “Cy” Fenwick joins Warrior Canine Connection after having spent several years working as a member of the media—both at ESPN and NBC Sports Washington. When the pandemic hit, Cy took time to re-evaluate his professional path and decided to switch to the nonprofit world.

“I love dogs and feel strongly about the need for mental health support, and Veterans, so when I saw the job posting at WCC, it immediately spoke to me,” said Cy. “Seeing how much these dogs help people moves me to my core; it makes me excited to come to work every day knowing that I’m contributing to a beautiful cause that I believe in.”

Cy grew up in The Plains, Virginia, with two older sisters and four dogs. And he comes from a proud military family; his grandfather served as a decorated Air Force Lieutenant Colonel in Vietnam.

Cy studied broadcast and digital journalism at Syracuse University. He is married to Sarah, his wife of almost one year, and they have two dogs (a Jack Russell Terrier named Rus and a rescue Chihuahua named Starfox). Outside of work, Cy has enjoyed fostering 12 dogs—all of whom have been adopted, and he loves making bread, going hiking and kayaking and spending time with family and friends. 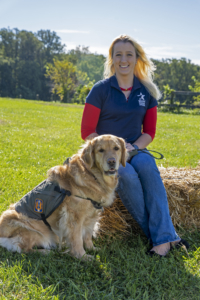 Samantha Johnson joins WCC after spending 10 years as a veterinary technician. She brings her amazing experience, along with her love of all animals, to WCC in an entirely new role—development officer!

Samantha says having a dad who served in Army Airborne definitely shaped the way grew up and fostered her appreciation for Veterans.

“I fell in love with WCC when I saw the job posting,” said Samantha. “This role combines my love of dogs and support for Veterans. Coming from a military background, our mentality was always ‘we help our own,’ and I knew I wanted in. Everything’s amazing … everyone is so awesome, they welcomed me with open arms.”

After working as a vet tech, Samantha used her bachelor’s degree in biology as a genetic counselor assistant for a genetic testing company.

When she’s not still volunteering with her former veterinary clinic, Samantha enjoys rock climbing, checking out local events, including the “Live at 5” concerts in Frederick, and hanging out with friends. A devout animal-lover, Samantha has a cherished yellow Lab named Rudy.