“Every once in a while, a dog enters your life and changes everything.”
– Anonymous 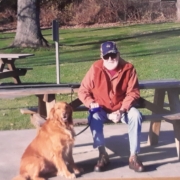 Kathryn Greenly says that quote is particularly true for her husband, Dee Greenly, who passed away in December 2020. On June 14, Kathryn, along with family members and friends, will celebrate Dee’s life. And there will be a lot to celebrate—as Dee lived a very purposeful and inspiring 86 years.

Dee’s eight-plus decades on earth are marked by significant accomplishments, milestones, and his passions. He served in the U.S. Navy from 1950-1954, where he was stationed aboard the U.S.S. Rochester. He also spent 31 years working at NASA, where he served in several capacities tied to safety, reliability, and quality. He shared almost three decades of marriage with his wife, Kathryn; April would have marked their 30th wedding anniversary. He was also a father to two children, Jeffrey Dee, and Lisa Anne, from his previous marriage. And he was devoted to his faith; he spent several years doing mission work.

As Kathryn will tell you, another one of his great passions was Abraham or “Abe”—the dog that came into his life and changed everything.

“Dee had a purpose for living after he got Abe,” says Kathryn. “I was working, and Dee was retired, and he was kind of lonely. Getting Abe gave him a new purpose. He would walk with him, care for him and it gave him a desire to stay active and keep physically fit.”

Abe was from the Golden Rule Assistance Dogs Program, which Rick Yount, executive director and founder of Warrior Canine Connection, started and ran back in Morgantown, West Virginia many years ago—prior to starting WCC.

Abe was a puppy from a litter that Rick’s dog and muse, Gabe, sired—the sole male in the litter of seven. Dee was the first Veteran that Rick matched with a service dog based on the chemistry he saw between Dee and Abe.

Rick says Dee inspired him and the teens who helped to train Abe at the Alternative Learning Center (ALC), as Dee devoted his time to form connections with all Abe’s teen trainers. Rick also added that Dee’s gratitude to the kids in the ALC helped many of them to see themselves differently, realizing the positive impact that they were making in their community.

After Abe and Dee “graduated” from boot camp in 2004, Abe was Dee’s faithful helper and companion for more than 12 years.

“Abe was a gentleman … he was calm, he was just such a loving dog … so many people knew Abe but didn’t even know us—he was just that kind of dog,” said Kathryn.

In fact, he was so special of a dog, that Dee told Kathryn he wanted to be buried with his special dog’s remains. On June 14, Dee and Abe will be interred at the Grafton National Veterans Memorial cemetery together.

Rick, who will attend the ceremony in Grafton, the small W.Va. town where Gabe was born, shared, “It will be an honor to be a part of Dee’s celebration of life and reflect on his influence on my life’s path. I was blessed to witness Dee’s and Abe’s Warrior Canine “connection” from the beginning and now when they will rest together at the Grafton National Veterans Memorial Cemetery. I would love to name a future WCC puppy, “Dee,” to honor Dee Greenly and his service to all of us.”