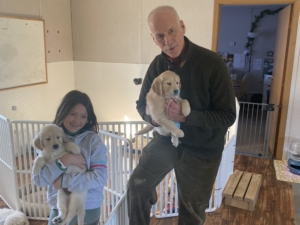 John Shooshan, president and CEO of the Shooshan Company, a privately owned investor and full-service development group, built his career in real estate. Now, thanks to his philanthropic giving, he’s helping Warrior Canine Connection build its program and reach in support of Veterans.

“I have always had an admiration for our military and am a big fan, and virtually all my life, I’ve had dogs, so Warrior Canine Connection is a great intersection of both of those things,” said Shooshan.

This year, John’s generous support allowed WCC to hire a new service dog trainer position and provided for the purchase of a new skid steer to support its facilities and construction efforts. He has committed to additional funding over the next four years that will support the continued salary of the trainer.

“Multi-year support from friends, like John, is so important to WCC,” said Jennifer Wilder, director of development at WCC. “His thoughtful gift is not only helping us build capacity so that we can support more Veterans today, but also far into the future. History tells us that the invisible wounds of war will not quickly diminish. John’s gift is helping us be prepared to provide WCC services to Veterans however long they are needed.”

John says his affinity for the military started when he was young; his father served in World War II, and he had hoped to follow in his father’s footsteps. At the time of his high school graduation, a parent’s written consent was required to enlist in the military. His father encouraged John to go to school for a year first and then decide. He got involved in school and sports and time marched on.

“I think I would have been a better person had I served, one regret I have is that I didn’t have the courage to go back and do that, so I’ve always held our military in the highest esteem because they had the courage to do that and take those steps,” said John.

John and his company have built several buildings for the Department of Defense and the intelligence industry. He says he spent more than half of his career trying to find ways to serve where he couldn’t when he was younger. And providing for WCC is one more way.

“If you’ve had dogs, you know they’re unique and very different from people,” said Shooshan. “Someone once told me that dog spelled backward is God, they’re just such affectionate, caring, and kind creatures, and they provide a safe, physical and spiritual connection, especially for people who have been scarred physically or emotionally. And what I really like about Warrior Canine Connection’s unique training process is that it isn’t a one-for-one program — it has the capacity to impact so many Veterans’ lives along the way.”

John and his granddaughter, Lucy, recently visited WCC’s Healing Quarters (see photo above) and had the opportunity to cuddle some future service dogs. Although small, snuggly, and adorable, he remarked that each one holds so much promise to impact so many Veterans’ lives in the future.

“We don’t have this country without the sacrifices for what our military has made for us,” said John. “We live in the greatest country in the world, but we often lose sight of the fact that there are individuals and families that make huge sacrifices when we go to war. God forbid they don’t come home, these wars come at a price and these families chose to protect our country and it’s our duty to support them every way we can.”

Thank you, John, for your generous support and continued partnership.