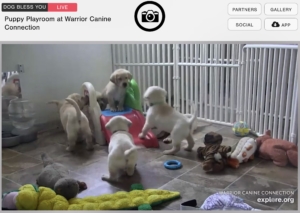 Warrior Canine Connection recently caught up with Courtney Huq, social media director for explore.org, the host site of WCC’s live puppy cam. We chatted with her about the partnership between the two nonprofits, how the puppy cam came to be, as well as some other fun tidbits.

explore.org’s mission is to bring people closer to nature and to champion the selfless acts of others. The platform currently boasts 166 live webcams and growing, seen across four continents (North America, Africa, Asia and Europe), along with 10+ million Facebook followers.

Below are some highlights from our conversation.

1. explore.org has been a great champion for WCC. Can you share a bit of the history of the organization’s support of Veterans?

Answer: Our founder, Charlie Annenberg, he’s always been a champion of Veteran-related causes dating back to when he was making documentaries tied to philanthropic initiatives. He also has a love of dogs and it all tied together. He thought training service dogs for Veterans was a beautiful and brilliant idea, and the idea was born.

2. When and why were WCC’s puppies added to explore.org? And how has it enriched your platform?

Answer: We first got connected with WCC through Rick Yount (WCC’s founder and executive director). At the time, Rick and Meg Olmert (WCC’s director of research) approached us and told us about WCC. The more we learned, the more we thought it was an amazing pairing of war Veterans who might be dealing with mental issues related to their military service with their pairing to service dogs. We got connected in 2011 and came online in 2012. WCC was the first puppy cam on explore.org.

There are currently six total puppy cams and three or four on and off with active litters on our platform.

3. We know puppies and all dogs, in general, are fantastic. But in your own words, what makes puppies so special and such a huge attraction on the puppy cam?

Answer: Aside from the fact that everybody loves a puppy—unless you’re a monster [laughs], you just automatically see them and go “aww.” I agreed with the first pitch Meg Olmert ever gave us—it’s an automatic chemical serotonin response, and I think that’s true of all the cameras we have; there’s just something about puppies that just comforts people and offers them a little bit of therapy.

4. Did you anticipate the reach the WCC puppy cam has had?

Answer: When we launched the puppy cam, we didn’t realize the reach. It was probably one of the more popular cameras immediately when we first started incorporating it, and it just grew from there and we continue to add cameras of organizations that we believe in.

5. What’s the coolest/most touching story you’ve heard from someone who watched the explore.org/WCC puppy cam?

Answer: There have been A LOT over the years. The most touching stories to me are when people approach us and say either ‘I have a terminal illness’ or ‘my close relative has a terminal illness and these puppy cameras are the only brightness of my day-to-day.’ That’s powerful. The joy the puppies bring is so meaningful … there’s been more than one situation; it’s not a one-off, it happens a lot.

6. What would you like people to know about explore.org that they may not already know from watching the live streams?

Answer: I’d like to think a lot of people know but we sort of tuck this in the background—that there is a philanthropic element to every single camera. We don’t just partner with organizations because we want to show a cute animal or a pretty landscape. There’s a reason behind everything. We want to make sure WCC and other organizations have funding to do their work; we have them on the website because we believe in their missions.

7. In your opinion, has there been a “favorite” litter to date or one that has stood out to you over others?

Answer: Definitely, I want to say the launch litters were the most popular, like Holly’s Half Dozen. Holly was an immensely popular dog and her puppies were such a big deal. They sort of looped everyone into this addiction of watching the joy and sharing the joy of watching puppies whenever you wanted to.

I was sorry to hear of Holly’s recent passing; her legacy left an impact on a lot of people, including the puppies of hers who were placed as service dogs.

8. Have you followed the progress/development of any of the puppies who’ve made appearances on the puppy cam?

Answer: A lot of them have Facebook pages, and I do like a lot of those pages. We run Dog Bless You, so we share stories there and enjoy seeing what the dogs are doing.

Answer: Only that we really value our partnership with WCC, and it’s been really inspiring over the years watching them grow as an organization. And it is well-deserved progress that they’ve made.

You can watch the WCC live puppy cam on explore.org here.