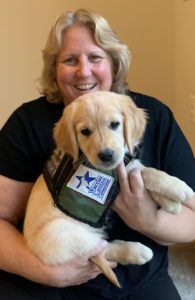 George E. Batchelor had many passions in life. He learned to fly at age 16 and began his long aviation career in his early 20’s by helping design the P-51 fighter plane. Mr. Batchelor served his country during World War II as a decorated Army Air Corps officer, transport and bomber pilot. He also had a deep fondness for animals and the environment, and so when he established The Batchelor Foundation Inc. those were among the key areas of which he chose to give support.

In fact, the Batchelor Foundation’s mission is to provide philanthropic support to nonprofit organizations that focus on promoting the good health, education and well-being of children, animal welfare and the preservation of the natural environment in South Florida.

Warrior Canine Connection came to the Batchelor Foundation by way of Extreme Puppy Watcher Terrie Bates, who got involved with WCC through the magic of Facebook and watching the puppy cam. She traces her ties to the organization back to “Holly’s Half Dozen,” when she and other EPWs helped pull together a party to see the puppies — that was when Explore.org, the 24-hour puppy cam, had just launched.

“My affinity for WCC started with the love of dogs, but seeing the mission in action and the difference it can make in a Veteran’s life is amazing,” said Terrie. “I grew up in the Vietnam era where it seemed like we lost an entire generation of Veterans who returned home with PTSD and other injuries, yet there was little understanding of these issues and no support system to help them. We know better today so we need to do better, and WCC is one of the organizations filling that role — helping Veterans transition and reintegrate back into their families and communities.”

A long-time employee of the South Florida Water Management District, a large government agency that services Orlando to the Keys, Terrie got to know Sandy Batchelor when Sandy served as a member of the organization’s Governing Board during her six-and-a-half-year tenure.

Each year, the South Florida Water Management District picks a charity to benefit from their employee’s fundraising activities; in 2014, WCC was selected based on Terrie’s nomination. Sandy volunteered to be the Honorary Event Chairwoman on behalf of the Governing Board and several years later, the Batchelor Foundation is still providing generous support to Warrior Canine Connection and Terrie is still glued to the WCC puppy cam.

“I think it’s always understated how much everybody that’s associated with WCC gets out of their affiliation,” says Terrie. “There are so many friendships that have been made across the country among people who literally would have never met otherwise. They all feel like they’re contributing — certainly, the mission and focus is on Veterans, but the support and connections touch a lot more lives than just the Veterans — an entire community has come together as a result.”