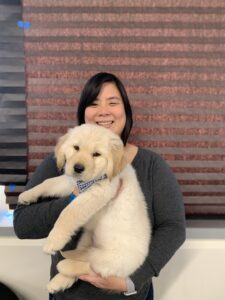 Like most people across the United States, WCC puppy parent Karen Chiu has been working from home for almost three months due to the COVID-19 pandemic. She’s been observing the “stay at home” policy enacted in California, except for necessary trips for food, essential supplies and, of course, dog walks for Frank.

A WCC service dog-in-training, Frank is a one-year-old Golden Retriever — the sixth WCC dog that Karen has helped train. And the sixth to capture her heart.

“There’s just something about dogs…they’re loyal, they always have love for you, they’re always happy to see you and there’s never any judgment with dogs,” says Karen. “They see a human, they love them, and they are always there for them.”

First came Jenny. Then Katie. Then Lisa, who was followed by Greg and then Tommy. And now, of course, Frank, or “Frankie” as Karen calls him.

Like so many of WCC’s volunteers, Karen discovered WCC through the Explore.org puppy cam back in 2015. Shortly after, she found out about its Menlo Park location in California, started volunteering, and has been hooked ever since.

“I love the work that WCC is doing here in Calif., where the dogs are working with Veterans almost daily,” said Karen. “It’s really awesome to hear their stories, even from those who help train the dogs. It’s so awesome to hear how these dogs are changing their lives and see the impact they’re having on them.”

Besides helping to care, feed and train six dogs, Karen’s attached her name to numerous other events to help WCC, including past graduations and fundraising events. All WCC has to do is cite the need, and Karen’s name can be found on the list of those willing to help.

“Karen is a great source of historical dog information and she plays a huge role in supporting the West Coast WCC site,” said Alexis Baker, California Program Manager. “She’s an incredibly experienced puppy parent, and willing to go the extra mile for her dogs in whatever ways they need. She’s also an amazing social media maven and has single–handedly fulfilled our Wishlist twice in the last 12 months. Because of her and her amazing skills, we have access to a lot of supplies for our dogs and veterans to use during training.”

Together, Karen and Frank are continuing their WCC service dog training virtually. Although they attend their weekly classes via computer, Karen senses “Frankie” is missing his in-person interaction with the Veterans with which he regularly works.

“He recognizes people on the calls — his ears perk up when he hears their voices,” says Karen. “He’s such a social fellow, there’s no doubt he’s missing that regular close connection he had with the Veterans.”

Both Karen and Frank hope it’s just a matter of time until they’re able to return to in-person training but, in the meantime, they’re subscribing to their training schedule and enjoy sharing some of their new lessons, at-home adventures and antics on Frank’s Facebook page.

Thank you, Karen, for sharing your time, talents and treasures with WCC!