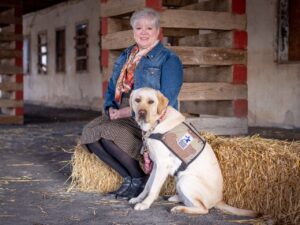 Since Robin Martin began volunteering with Warrior Canine Connection in 2012, she’s had a running tally of 22 dogs who’ve been in out and of her house — and her heart. She has been a puppy parent to five dogs, helped train several spirited dogs and she’s puppy sat countless others.

Currently, Robin is puppy parent to WCC service dogs in training, Manion and Mike II. She and husband, Kent, live in Cleveland, South Carolina, which is roughly an hour away from Asheville, North Carolina; that’s where WCC runs a service dog training program in conjunction with the Buncombe County Veterans Treatment Court (VTC). It’s a program Robin says resonates with her in more ways than one.

“It’s the mission — the whole Veteran mission,” says Robin. “My Dad was a Veteran and he served three tours in Vietnam. I was an Army nurse and served at the old Water Reed. It’s something I believe in; I’ve seen what these dogs can do. I love every second of it, every minute of it — right down to every piece of dog hair in the house.”

The Buncombe County VTC program included WCC’s service dog training in its programming in 2018.  Since then, it has become one of the most popular programs among the Veterans involved — a program that Robin has played a huge part in. In fact, WCC Service Dog Training Instructor Amy Guidash says Robin’s help has made it possible for WCC to take on several additional Veterans groups that are now participating in WCC’s Mission Based Trauma Recovery (MBTR) training program, including the Charles George VA Medical Center in Asheville and FIRST at Blue Ridge, a residential therapeutic community for individuals and Veterans with substance abuse disorders.

“Robin is a strong handler who takes on some of the more challenging dogs on purpose,” said Amy Guidash. “Her consistency is what we know to be really helpful. She wants the dogs to succeed, and she’ll be the first one to say, ‘hey, you know this dog isn’t a pet, right?’ She is 100-percent dedicated to fulfilling the standards WCC upholds. Robin can be direct, yet is open, confident and friendly at the same time, which allows for great communication with the Veterans. She is an absolute joy to be around, and we’re just so thankful that she’s part of the Asheville program.”

Robin got involved with WCC while working for The Home Depot, where she spent 20 years as a District Service Manager. In fact, it was Alice Belthoff, whose name you may recognize as an Extreme Puppy Watcher (EPW) and a dedicated WCC volunteer, who first connected with Robin back in 2012; she sent a letter to The Home Depot requesting some assistance for the old WCC property in Brookeville. The note was forwarded to Robin from the local store manager, and shortly after, she went out to the old WCC headquarters, where she met Rick (Founder of WCC) and Molly (WCC Director of Dog Programs) for the first time.

“While I was there visiting, Molly put a puppy in my arms and it was game over,” said Robin. “I filled out an application right away, completed the required training and was a puppy parent before long. The Home Depot was great and helped provide all of the materials and manpower to convert the garage at the old Brookeville headquarters into WCC’s first Puppy Enrichment Center, and I’ve been hooked ever since.”

So hooked that Robin and Kent, who have both since retired and had planned to move to from Maryland to South Carolina to slow down and leave the bustle of D.C., actually postponed their move until they knew the WCC program at the VTC in Buncombe County, N.C. was up and running, so as not to miss a beat.

First, there was Flurry, then Tommy, followed by Calli, and now Manion and Mike II, no matter how many dogs pass through her doors, Robin says each one leaves its own impact.

“[Said through tears] A little piece of your heart goes every time you pass that leash,” says Robin. “There’s no way you can raise these dogs for 18 months to two years and not become attached, because they don’t trust you if you don’t love them, so you have to love them to get them to do what you want them to do. And it’s so worth it seeing them go on to help our Veterans.”

While the dogs go on to serve a bigger purpose, Robin says one thing she finds unchanged is the friendships and connections she’s built through WCC.

“I have four children and four grandchildren but the EPW community has expanded my family,” said Robin. “We have such a network of support… my mother’s in a nursing home, and on my tough days, I can reach out to any single EPW and they are there to support us — just like we are for all of them. It’s such a special community; I have life-long friends now and people I go on vacation with, and it all dates to the first “paw-ty” in Brookeville.”

Please join us in giving Robin a round of “a-paws” for her unwavering commitment, dedication and support of WCC’s programs, the Veterans it serves and all the people she’s touched along the way.