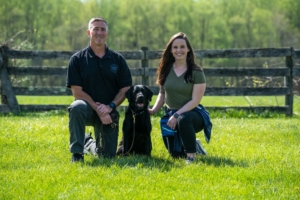 While breeding, training and placing service dogs with Veterans is one of Warrior Canine Connection’s (WCC) primary objectives, not all dogs are an ideal fit for the job. In fact, only 35-40% (on average) of a WCC litter will end up placed as a service dog. So, what happens to the rest of the litter? WCC also places military family support dogs and facility dogs, and other dogs are considered career change or release dogs with priorities set for military families. Whether they choose a career of service or not, WCC’s dogs all end up in a happy home.

To graduate from WCC’s service dog training, a dog must pass all of the necessary health tests as well as their training courses. As our excellent trainers get to know the dogs better through training and socializing, they are able to understand what a dog is good at and what they need to improve on. Our trainers have special bonds with each and every dog that comes through the program, and helping the dogs determine their future is an essential objective.

WCC’s Manion, named in honor of U.S. Marine Corps First Lieutenant Travis Manion, is a great example of a successful career change. One of the first traits that began to emerge with Manion was his work drive.

“Manion’s motivation to serve others is his most unique trait,” said Manion’s first puppy parent, Patrick Siemon, who spent seven months helping raise Manion. “He has always been so focused on whoever has the other end of his leash and is always ready to work. He looks at whoever he is training with like they are the only person on earth and rarely takes his eyes off of them.”

When Manion was around 9 months old, his service dog training began. WCC trainer Jen Blessing had the honor of being Manion’s main handler and trainer while he was at WCC.

“When Manion first got here, he was a crazy puppy with no boundaries,” said Jen. It didn’t take long for Jen’s training to start making a difference, though. “It was a little rough for the first couple of weeks, but then Manion really snapped into it. He just needed a little help.”

As the training progressed, Jen noticed that while Manion was enthusiastic in trying to learn, his house manners stilled needed some work. He was having a tough time breaking his habit of counter surfing for food.

“He’s so smart that he learned how to get away with things, and his drive for food beat everything else. He had an over-arousal with food,” said Jen. “Bad house manners are one of the pretty clear indicators that a dog may not be a good fit as a service dog,” she explained.

Two things had become clear to Jen: Manion had a high work drive, and Manion was food driven. After a stall in Manion’s progress in the training, WCC decided an environmental reset could help fully unlock Manion’s potential, so he was brought to WCC’s Asheville, North Carolina, location. There, he continued to show a strong desire to work, but his endless stamina and devotion to food were still holding him back from his service dog training.

After about six months in Asheville, Manion returned to WCC’s Healing Quarters in Boyds for an evaluation. The trainers at WCC collectively decided that Manion’s high energy and house manners may not be ideal for a service dog.

The next step was to figure out what career would be a good fit for Manion, and Jen shared her input with the other WCC trainers: “He needs to have a job. He loves to work and is way too smart. Manion needed to be placed with an active person who will keep him stimulated. He clearly loves to work.”

Among the possibilities WCC trainers discussed was the career of being a search and rescue dog. “Work drive and toy drive has to be so high for a search and rescue dog,” continued Jen, and Manion had both of those traits. “We reached out to the National Disaster Search Dog Foundation (SDF), and they asked for videos of Manion doing certain things, like trying to find a ball in a field, so we laid a foundation with his toy drive. They ended up liking him.”

Manion made his career change and joined SDF, where he has fit right in. His work drive, toy drive and motivation for food made him the perfect fit for SDF. He has already assisted in multiple search and rescue missions, including one in Florida after Hurricane Ian devasted the state.

Jen and the rest of WCC continues to follow Manion’s journey with pride, joy and love. Even Manion’s first puppy parent, Patrick, still closely follows Manion’s growth with SDF. “When WCC told me they thought being a search dog would be a better fit for him due to his high energy, it made sense. I can’t wait to see what Manion and the Search Dog Foundation will get to do next to help others!”

You can follow Manion’s journey by following The National Disaster Search Dog Foundation on social media and Manion’s own Instagram page.