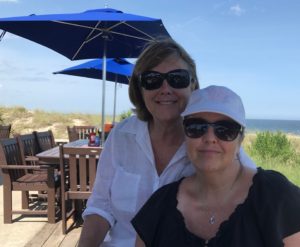 September will mark two years since Peggy Lester’s daughter, Beth, passed away. Although time slips by, the heartbreak never will.

“She was such a wonderful, happy person, a great mom, wife, friend and daughter,” says Peggy.

Beth went to college in Georgia, got married and had two children, Emma and Evan, and lived in the home she’d always dreamt about. She had everything in life she wanted.

But in 2015, she began having some concerning medical issues. Soon after, she was diagnosed with stage IV colon cancer. By the time it had been discovered, it was too late.

From there, Peggy, a single parent, endured an intense, year-plus journey into the world of caregiving; she retired early from her job working with special ed students so she could travel back and forth from Maryland to Atlanta to look after her daughter and help out the family. Sadly, Beth passed away in September of 2017 at the age of only 45.

“I was there when she came into the world and I was lying at her side holding her hand when she passed. She was at peace, so I’m thankful for that,” says Peggy.

When Peggy returned home to Maryland — a huge piece of her heart missing — she completely shut down with immeasurable grief. Knowing she had to do something, Peggy joined a support group for people, like her, who had had lost a child.

She also started seeing a therapist who happened to have been a volunteer at WCC. Knowing Peggy enjoyed dogs, her therapist recommended she sign up for puppy petting.

“I could not sleep at night and kept reliving the day that Beth passed and all of the traumatic memories of that day, so I got involved with whelping training and started doing overnight shifts,” said Peggy. “I wasn’t ready to be around people, and volunteering at WCC helped edge me back into the world again. Not to mention, the puppies and mamas kept me so busy, and it just really worked for me. I credit the wonderful WCC staff and dogs with giving me the support that I needed at the time.”

In fact, to-date, Peggy has logged more than 340 hours volunteering at WCC.

“I didn’t go in thinking it was about me, but it really did end up being therapeutic for me too,” says Peggy. “It gave me purpose, made me feel useful, and helped get me out of the house and, at the same time, it also gave me my space to grieve. I know they’re being trained for our Veterans, but these dogs are also helping to heal so many others along the way.”

Peggy still makes regular trips to Atlanta to see her grandchildren and son-in-law, Mike.  July 18th was Beth’s birthday. And although September will undoubtedly be another tough month ahead, Peggy says one thing she is looking forward to is attending her first WCC graduation.