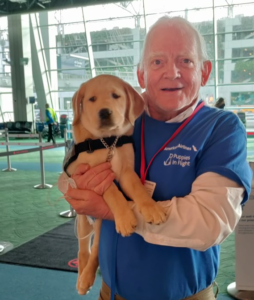 Terry Reece has always had a passion for travel. And dogs. He managed to successfully combine his love of both, and to date, has helped transport 116 dogs and puppies for Assistance Dog International-accredited organizations, including Warrior Canine Connection, to and from locations all over the U.S. and Canada.

Terry spent 33 years working for American Airlines before retiring last year. He was, as he says, “a behind-the-scenes guy,” working in the Passenger Tariffs Department. Roughly seven years ago, he saw an internal post requesting volunteers to help with the company’s Puppies in Flight program, which uses employee volunteers to transport puppies and older assistance dogs to ADI-accredited trainers and programs, and he jumped at the opportunity.

“It’s like dogs are almost built into my DNA, so when I saw the call for volunteers and training, I immediately responded,” said Terry. “I liked it so much … flying with the puppies on the plane is a rather enjoyable experience, so I continued to do it. It’s for such a good purpose … it helps these programs out, it helps them to fulfill their missions, and I made a promise to a very close relative a long, long time ago that was unable to take advantage of a service animal before he passed, so this kind of helps me fulfill a promise, too.”

And fulfill that promise he has … for the past six-plus years, roughly twice a month, Terry has boarded a flight to pick up a puppy or a dog and traveled to pick him or her up and then delivered him or her to their new training site, home and the next step in their future. The locations and dogs change but there’s a recurring theme on all those trips.

“I have had on more than one occasion — almost verbatim — have someone say ‘oh, this flight just got a whole lot better’ more times than I can recount,” says Terry. “And let’s face it, having a puppy onboard tends to have a calming influence for the entire trip, which we can all use, especially these days.”

Terry has transported quite a few dogs for Assistance Dogs of the West (ADI), a partner program of WCC’s, and through ADI, learned about WCC’s programming.

“Thanks to volunteers like Terry, and American Airline’s Puppies in Flight program, we have been able to get service dogs in training to locations where they can get plugged into training and best serve our Veterans in need,” said Molly Morelli, director of dog programs, Warrior Canine Connection. “We are so appreciative of all the support, and the whole process has formed this amazing little community of people who just want to help others, it’s pretty remarkable. Terry’s volunteer efforts are just one more example of how these dogs are helping to form new bonds, new relationships, and positively impacting lives.”

But the job isn’t always glamorous. With travel layovers and cancellations, there are sometimes challenges along the way.

“I have to be quite diplomatic because everyone always wants to pet the dogs,” said Terry. “I see it as a great opportunity to educate people about service dogs. Overall, the people come up and ask about the dog, the vest they’re wearing, and that’s my opportunity to do the advocacy piece and talk about these organizations that are doing great things with these dogs. It really does engage a lot of passengers because they’re so curious about the dog not being in the kennel and wearing a vest.”

As you might imagine, Terry has had his share of both touching as well as laughable moments while transporting puppies and dogs.

“I learned that I don’t care a lot for these airports that are totally carpeted [laughs],” but it’s not a big deal, I always have plenty of pee pads with me,” said Terry. “I learned to always carry puppies off the plane after a few hours and get them to a relief area or to put them down on a pee pad.”

Terry admits that more than a dog or two have tugged at his heartstrings over the years.

“In the first few trips I did, I did tear up a time or two, but thank goodness, I am a Saint Bernard guy [laughs],” said Terry. “I did have a talk with myself afterward that I can’t react like that it — it’s not about me, it’s about helping someone else you may likely never meet and do something good that will help someone else.”

WCC would like to extend a very special thank you to Terry and volunteers like him who give so much of themselves to help Veterans.