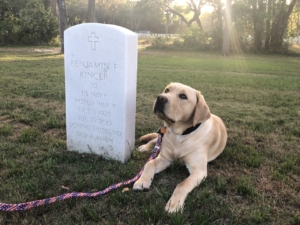 One of the unique ways Warrior Canine Connection (WCC) honors Veterans is through its namesake program. All future service dogs are named after Service Members and Veterans who have made significant contributions to our nation.

The namesake program has a profound impact on those being honored as well as their family and friends. United States Army Chief Warrant Officer Erik Kesterson was nominated by his mother, Dolores Kesterson. Erik was killed in action in Iraq in 2003 while serving as a Black Hawk helicopter pilot for the 101st Airborne Division. Dolores had the opportunity to virtually meet the service dog named in honor of Erik.

“He looks like he has Erik’s spirit in him,” Dolores said while wiping her eyes with a tissue. “Just looking at him, he’s touched my life. He’s just beautiful. Erik would be so honored.”

Another distinctive aspect of WCC’s program is that it enlists Service Members and Veterans to help train the service dogs for others. This No-Fail Mission aligns with the warrior ethos of caring for your brother and sister in arms. The Veterans and Service Members doing the training know their hard work will contribute to helping a fellow Veteran or Service Member in need, while also receiving therapeutic benefits themselves.

United States Navy Lieutenant Commander Danielle “Purple” Thiriot is an active-duty Service Member who was also nominated for WCC’s namesake program. The service dog bearing her name was recently placed with a Veteran, and Danielle shared how much it means to her knowing a service dog named in her honor is helping other Veterans.

“It’s an honor to have ‘Purple’ named after me and to know that she will live a life dedicated to serving Veterans,” said Danielle. She was even able to meet the dog named in her honor. “I love dogs and have enjoyed watching her progress through training. I had the chance to meet ‘Purple’ in California last year and learned we share a love of food!”

The namesake program is a special part of WCC’s mission. Not only is the organization dedicated to helping and serving Veterans and Service Members suffering from visible and invisible wounds with its MBTR program, but it’s important to remember and celebrate Veterans with the namesake program.

“Our Service dogs have an important mission—to carry on the legacies of these heroes while helping recovering Veterans who have sacrificed so much for our nation,” says Rick Yount, founder and executive director, Warrior Canine Connection. “We feel it’s important that those Veterans have their stories told and their lives honored through our namesake program. We believe when a Veteran’s name is spoken, they are always remembered.”