Please join us in welcoming two new members to our team! 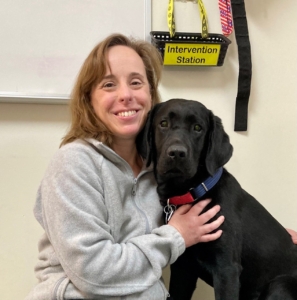 Kristina is the latest service dog training instructor to join our pack. She is based at the National Intrepid Center of Excellence (NICoE0) in Bethesda, where she meets with Service Members and Veterans and help run our Mission Based Trauma Recovery (MBTR) training program.

“Although I’m still settling in, I know this work is going to be absolutely rewarding and phenomenal,” said Kristina. “As a member of a military family and community, I’m excited to combine my passion for animals by providing support for Veterans.”

No stranger to the military, Kristina met and married a U.S. Army Foreign Area Officer, John, who gave her the opportunity to literally see the world. She moved 14 times in 24 years, but she was fortunate to enough earn her teaching certification in high school biology and taught off and on while stationed stateside.

Kristina graduated from Southern Illinois University with a bachelor’s in zoology. Her first job after graduation was as a zookeeper at the Houston Zoo. There, she led public animal shows with the birds of prey and educational demonstrations with Texas wildlife, exotic small mammals, nonvenomous reptiles and psittacine birds, and the general husbandry for the animals under her care.

She and her husband have two children, Isabella, 17, and Joshua, 14, and two Boasian street dogs that were rescued while their family was living in Sarajevo during one of John’s deployments. 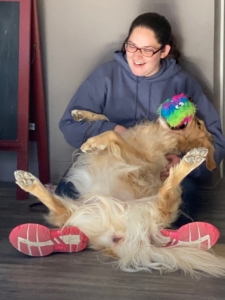 A Maryland native, Stacey joins WCC as a service dog training instructor from the Baltimore area. She started raising puppies for another organization (she is now raising her 10th puppy) and that’s what led to her interest in a career training dogs. Her experience as a puppy raiser gives her a unique perspective in her work with WCC and its amazing puppy parent volunteers.

“I completely understand what puppy parents go through when they pass the leash for advanced dog training,” said Stacey. “I was always the person bawling my eyes out before, and now I see it from the perspective of being the person taking the leash from the person crying on the other end. It’s helped me in my job to give advice and really relate to what they’re going through.”

Outside of puppy raising, Stacey worked at a dog daycare training facility in Columbia, Md., where she learned about dog behavior, body language and different play styles. Several years later, she began shadowing trainers and began leading group classes and doing 1:1 puppy training — experience that plays an instrumental role in her work teaching WCC’s “Boots” classes for puppies six months and under.

When not working, Stacey enjoys hiking with a combination of her four dogs, three of which are pets, and the puppy in training, which she is caring for until February 2023. She also enjoys participating in nose work with her Golden Retriever, Vito.