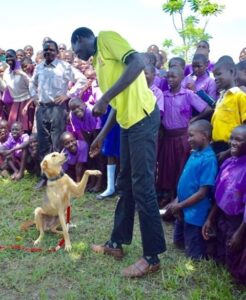 I’m Meg Daley Olmert and for the last 20 years, I’ve been researching the biology of the human-animal bond and its therapeutic effects. As you all know, WCC is the brainchild of Rick Yount and our Mission Based Trauma Recovery (MBTR) program offers Veterans in treatment for post-traumatic stress disorder (PTSD) the opportunity to help train a service dog for another wounded Warrior in need. The positive and intense social engagement needed to shape the behavior of a great service dog simultaneously reboots the veteran’s social brain network—the neural wiring damaged by combat trauma. Discovering that good dog training can reduce social fear and reduce stress is what we call MBTR’s “Trojan Dog Effect.”

The efficacy of MBTR in reducing the symptoms of combat trauma did not go unnoticed by medical and research leadership at Walter Reed and the Uniformed Services University (USU). Our research colleagues at USU received federal funding to conduct a pilot study of our MBTR program. I am now finalizing my contributions to the research paper on that pilot study that found a reduction in PTSD symptoms after just six one-hour MBTR sessions. Four other recently published studies showed a significant reduction of PTS after service dog training, supporting the concept of the “Trojan Dog Effect” and suggesting how it might be best engaged.

In 2017, I got a call from Sarah Schmidt, the founder and president of The BIG FIX Uganda—a non-profit, based in Port Townsend, Washington that operates the only veterinarian hospital in Northern Uganda.  Since 2012, BIG FIX has provided its services, 365 days a year, in its quest to ease the suffering of animals in Northern Uganda and eradicate the deadly threat of rabies. The BIG FIX animal hospital is in Gulu, the birthplace of Joseph Kony, the warlord who kidnapped 30,000 boys and girls and forced them into killing or sex slavery—or both. Those who made it out of the bush returned to their villages, where they were reviled and shunned as murderers or whores. Children born of rape are rejected as “Kony’s kids.” Sexual violence has left many with HIV. On average, 10 people in the Gulu district commit suicide monthly, with another three suicide attempts per week.

The fate of dogs in Northern Uganda is also grim. Everyone has them, but these dogs are not pets. They provide essential home security—especially when you don’t have a front door–and valuable hunting partners. Despite their service, they are often neglected, abused, and murdered. This emotional disconnect is fueled by the very real fear of rabies and the horror of a war that left many human survivors equally reviled and abused.

In 2015, The BIG FIX realized they had to expand their daunting mission to an even greater one—rescuing the traumatized people of Northern Uganda, as well. They created The Comfort Dog Project—an animal-assisted therapy much like Warrior Canine Connection—except it’s for people who have never imagined a canine connection! This radical idea was inspired by community psychologist, Francis Okello Oloya. Francis was blinded at age 12 during the war and miraculously survived against all odds. While at boarding school, two local dogs were attracted to him. Amazingly, each night when those dogs heard the tapping of his cane, they would come and guide him to the latrine. Not only did this mean he didn’t have to suffer the humiliation of asking a fellow student for help, it showed him the generosity and caring hearts beating in these dogs that no one else saw.

The Comfort Dog Project combines trauma counseling with instruction on how to create loving bonds with dogs rescued and rehabilitated by BIG FIX. The Comfort Dog Project also discovered how important dog training is to solidify the human-dog bond and enhancing the program’s therapeutic impact. Since 2015, 38 Guardians have completed the program and become “Field Educators.” This is particularly impressive considering the severe social shut down suffered by many when entering the program. The Comfort Dog Project Field Educators find they can now play key roles in the mobile field clinics teaching local dog owners how to care for their dogs and doing dog training demonstrations that amaze and delight all. One hundred percent of participants had a reduction of PTSD symptoms and improved well–being. Another measure of the program’s success? The 150 people have applied to join The Comfort Dog Project program this year. Now, the challenge is being able to say yes to them all. Sound familiar?

Even with my knowledge of the deep neural roots of the human–animal bond, The Comfort Dog Project stretches the limits of anything I’d ever thought possible. I knew if I were to even attempt to understand this most unlikely alliance, I’d have to see it myself. On Sept 24, I traveled to Northern Uganda and spent two mind–bending weeks manning a BIG FIX free field clinic that vaccinated 1,000 dogs for rabies, assisting in the spaying and neutering of 75 dogs in a “clinic” with no running water or electricity, visiting hundreds of school children to teach them about animal rights and rabies prevention. I even joined Francis on a radio broadcast to tell 3 million northern Ugandans about Warrior Canine Connection! And I marched through Gulu with proud Guardians and their Comfort Dogs in the BIG FIX parade to celebrate World Animal Day—quite the demonstration of loose-leash walking!

It’s hard for us to understand how radical this approach is for people who’ve at best, seen dogs as a tool—at worst a cur or a deadly enemy. But neither can we grasp the desperation of the people of Northern Uganda. But I saw with my own eyes that this program is making the unimaginable a healing reality. The ability of these dogs to forgive the cruelty they’ve suffered is inspiring and it allows the Guardians to rediscover emotions like love, pride, and joy. Together, humans and dogs are forging family bonds where there were none, creating a powerful psychobiological buffer against despair. Together, both are safer and happier, living proof of a BIG FIX.

We at Warrior Canine Connection are honored to support our kindred colleagues in Uganda and inspired by their vision and bravery. Watch this short video by the BBC so you can see this miracle for yourself.