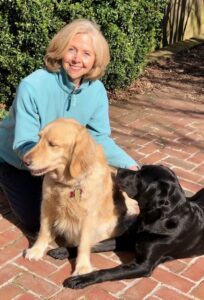 Wednesdays are Fran Frazier’s favorite day of the week. Before the pandemic, that’s the day she would make the 45-minute drive from her home in Northern Virginia to the Warrior Canine Connection Healing Quarters in Boyds, Maryland to take photographs of the puppies on-site.

You know the ones — the adorable pics that chronicle the growth and development of the puppies each week, sometimes they even include sunglasses or some other holiday-related décor… they’re the photos that result in countless oohs and ahhs from WCC’s followers on Facebook and all of us, really.

“It fills the heart — you can’t help but be happy while you’re there, especially knowing they have such important jobs ahead, it’s thrilling to be part of their early stages,” said Fran.

Fran says she feels like an “imposter” photographing the puppies. That’s because she spent two years assisting Lori Marshall, the previous WCC volunteer photographer, with the weekly photos. Fran says she learned a lot from Lori, including setting up lights, the backdrop stand and advanced puppy cuddling techniques (Fran refers to Lori as “the puppy whisperer”). When Lori left, Fran and a couple other volunteers stepped in to give photography and puppy-wrangling a shot. That was more than a year ago now.

In fact, Fran’s been so inspired by the process that she upgraded her iPhone camera to a real one, although she confesses, shooting and editing photos is a process she’s still finetuning.

Fran won’t take all the photo credit, though; she’s quick to tell you that there are two-to-three volunteers who show up each week to take photos — notably, Paula McCorry, Kristen Durning and Sally Katz, and she says that the photos wouldn’t happen without them.

When you ask Fran about herself, take note not to use the word “retired” — that’s not a term in her vocabulary. As she will tell you, she “opened a new chapter” in her life several years ago, after decades of working in the nonprofit sector and with government and trade associations. She’ll tell you through a smile, this next chapter includes puppy photography and the pursuit of the perfect chocolate chip cookie recipe — something that is also synonymous with Fran around WCC’s headquarters.

“She’s going to need to find a new hobby, because if you ask me, she’s ALREADY perfected her chocolate chip recipe,” Allison Pitcher, digital communications specialist, WCC. “We love her cookies but hate them at the same time — for those of us trying to watch our sugar intake.”

Not long after one new chapter began for Fran, another ended — this one, the unexpected, heartbreaking, life-changing kind: Fran’s husband, Tim Henline, who was also very involved in volunteering for WCC, passed away in November 2019.

Both Fran and Tim got involved with WCC in 2013 after seeing how important a friend’s service dog was to her. They knew they wanted to somehow get involved and discovered WCC. By sheer fluke, Fran says she found the WCC puppy cam on Explore.org and knew they had to get involved. The duo began puppy petting early on, which evolved into helping with the whelping box and other duties.

“Tim and I were/are so proud to help support the organization and its mission and grateful for the opportunity to do so,” said Fran. “WCC was so very supportive during Tim’s illness and passing…. it sure is an amazing group of people. And it continues to be a very important and supportive chapter for me. What began as puppy petting became such a special part of our lives, and having Mackie and Ann fill our hearts and home is a truly special gift,” said Fran.

Fran and Tim also became caretakers to breeder dog Ann, who has had three beautiful litters of pups. They were also delighted to welcome Mackie, a wonderful career-change Golden Retriever, into their home.

Fran says she can’t help but continue using the word “we” when sharing stories and information about her life. Since losing Tim, she says life has been an adjustment. But having Ann and Mackie is slowly but surely helping her round out her days.

“The opportunity, in any way possible, to support WCC’s mission to help recovering Warriors reconnect with life, their families, their communities, and each other is truly an honor and a privilege,” said Fran. “We are so very grateful to those who serve this Nation.”

WCC’s on-site volunteer program has been halted since March, except for only mission-critical needs. Warrior Canine Connection is excited and hopeful about having our volunteers back on-site when it’s safe and responsible to do so.