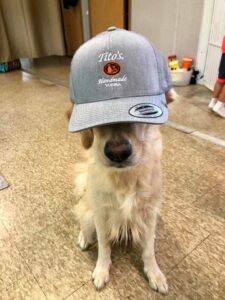 Tito’s Handmade Vodka might spark the image of a chilled cocktail in your mind. But did you know that besides producing award-winning spirits, Tito’s prides itself on creating “Vodka for Dog People” and says that supporting its canine counterparts is core to its mission? That’s right, Tito’s has been committed to serving nonprofits, Veterans charities and dog-related organizations since its inception. And Warrior Canine Connection couldn’t be happier to be among its list of beneficiaries.

In fact, Tito’s Handmade Vodka has been donating to charity events since day one. True to its roots, the company donated to more than 8,000 events last year alone.

But Tito’s support to WCC has been more than donating dog bowls; the company hosted a “day of service” at WCC’ s Healing Quarters in May. Seventy-five members of the Tito’s team came out to the grounds and built 500 feet of fencing around the training yard. Not only did they do the back-breaking work, but they also provided all the supplies to make a huge improvement to the grounds!

Long-time WCC volunteer Michelle Hennan helped make the relationship happen. She explains that it started with a quick email to a friend who was a Tito’s sales representative in Chicago, and a few emails and conversations later, Tito’s had committed to supporting WCC.

“Tito’s is a company that truly values giving back to its community, but especially to nonprofit dog and veteran organizations,” said Michelle. “It’s been such an honor to watch this relationship not only continue over the years but to also grow bigger and stronger.”

In August of this year, Tito’s also hosted a fundraiser benefiting WCC, whereby a portion of alcohol sales throughout Montgomery County, Maryland were donated back to WCC, resulting in a $10,000 donation to WCC to support its programs.

In September, Tito’s provided gifts in kind for WCC’s 2019 graduation celebration. The company also put up $5,000 for a matching gift challenge to WCC’s Extreme Puppy Watchers (EPWs) during graduation in 2018. If you’re familiar with the passion and love the EPWs have for WCC, you won’t be surprised to learn that the challenge was met in just three hours!

“We have found a tremendous partner in WCC, whose values and ethics echo Tito’s desire to give back to all who need,” said David Kent, state manager for MD/DC/DE, Tito’s Handmade Vodka. “WCC’s focus on both our military as well as animal welfare rings loudly within our culture, and we couldn’t be prouder to say we’re true partners with the group. We look forward to a long, healthy, puppy–filled relationship, and we are anxious to continue our support of this great group.”

Please join WCC in saying a very special thank you to Tito’s Handmade Vodka for its continued support and shared passion for serving others.