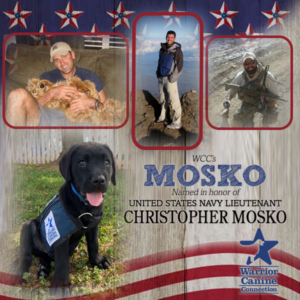 Gold Star Dad John Mosko has an online blog now used to memorialize his son, Navy Lieutenant Christopher “Chris” Mosko, who was killed in Afghanistan. The process was therapeutic, albeit very emotional for him. The practice allowed him to openly share his thoughts, feelings, and grief, but perhaps even more purposeful, was a way to keep Chris’s memory alive.

Chris was an explosive ordinance disposal (EOD) technician. He was killed on a road in Afghanistan by an improvised explosive device (IED) on April 26, 2012. John says not a day goes by that he, his wife, Gayle, and daughter, Meredith, don’t think about Chris.

So, when John and Gayle were approached by the University of Pennsylvania NROTC unit about having a Warrior Canine Connection (WCC) service dog in training named after Chris, it was an automatic yes.

John shared a story about their family’s first pet — a black Lab named Topper. The kids, Chris and his younger sister, Meredith, were young — in the single digits at the time. John says Topper and Chris were fast friends, pretty much inseparable — they grew up together. So, when John learned WCC’s Mosko, named for Chris, was a black Lab, it just felt right.

“We are excited that Mosko’s been named after Chris, it’s one more way to keep his memory alive and share stories about him,” said John. “And to know this dog will go on to help other Veterans, it’s very much in line with how Chris lived his life — reaching out to others, helping them, and being appreciative of what he had and of others.”

Military service was a calling for Chris. John recalls an early moment he traces back to his first inclination Chris would go on to serve his country.

“When he was about 5 years old, we were watching the Army vs. Navy game, and Chris said, ‘one day I want to be one of them and he pointed to the Midshipmen,’” shared John. “He didn’t go to the Navy, but he did end up going the ROTC program.”

Chris attended Drexel University, where he studied commerce and engineering. A soccer player in high school, Chris tried out for Drexel’s soccer team while simultaneously attending ROTC orientation. Afterward, he was offered a redshirt position on the soccer team, much to his and his family’s surprise, and a spot on the ROTC squad. John said his choice was immediately clear.

“Chris said ‘that ROTC orientation week was the best week of my life,’ afterward,” said John. “It wasn’t an easy week, either. They put those kids through the ringer to make sure they knew what they’re getting themselves into and that they would honor their commitment.” John added, “He loved it, loved his teammates, and just loved the whole ROTC community.”

The ROTC program at Penn is also a new training site for WCC’s Mission Based Trauma Recovery (MBTR) service dog training program, where WCC’s Mosko trains with area Veteran students and faculty. WCC’s MBTR program teaches Veterans to train service dogs for their fellow Warriors. The program fulfills a time-honored military tradition of Warriors helping Warriors, and in doing so, Veterans can also benefit from their own skills development in communication, confidence building, accountability, emotional regulation and patience.

John says Chris’s affinity to serve likely started with his own father, Milton Mosko, who served in the U.S. Army and fought in Korea.

“When Chris hit ROTC, he and my dad talked about stuff my dad never talked to me about, so there was a bond between them,” said John. “What Chris was doing really opened up my dad to talk about it a little bit more. One really special moment for us all was when Chris was commissioned at the Union League in Philadelphia and my dad was there to put his bars on.”

John says losing his son has been the one great tragedy in his family’s lives.

“We still try to laugh and do find joy in things, but there are no guarantees in life or for tomorrow,” said John. “So, we try to do things to keep his name alive, honor him, and introduce him through stories to those who never had the chance to meet him.”

Chris lives on in dinner table conversations, family gatherings, holidays & anniversaries, through Veterans’ events the Moskos attend, and now, through a little black Lab named in his honor.

Dogs are bred specifically for the program and are mostly Labradors and golden retrievers — breeds smart and sturdy enough to help veterans with both mental and physical disabilities.

Curious passers-by often can’t help but peek into Jennifer Desher’s office on the University of Pennsylvania’s campus: On any given afternoon, she’s playing host to a handful of rambunctious puppies as young as nine weeks old. Read the full story from The Philadelphia Inquirer.

PHILADELPHIA (WPVI) — A new program at Perelman School of Medicine at the University of Pennsylvania aims to improve the lives of veterans, both on staff and in the community through service animals, like four-month-old Mosko.

Mosko is a playful pup undergoing some serious training.
Check out the full story on WPVI News 6 here.