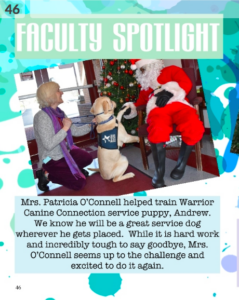 This year’s St. Jude Regional Catholic School yearbook features a very special pupil — one with four legs, a wet nose and a tail. After spending several months attending classes at the school, students decided that Andrew, a service dog in training with Warrior Canine Connection (WCC), should be included in their 2019-2020 yearbook.

Middle school teacher Pat O’Connell, who was a puppy parent to Andrew, meaning she was a volunteer who helped raise, train and care for him for several months, brought him to school every day from September – December 2019.

“The kids took having Andrew in class very seriously,” said Pat. “They understood he was in training and some students already had experience with a service dog. Most did their best to ignore him, others couldn’t help but stare at him because he was so cute.”

A yellow Labrador/Golden Retriever mix, Andrew, like all dogs in WCC’s training program, is being groomed to become a service dog to assist a Veteran who has visible and invisible wounds.

Classes at St. Jude let out in December for the holiday break, and when students came back to school in January, they were sad to learn Andrew was not.

Due to Andrew’s intelligence, eagerness to please and love of training, WCC service dog instructors decided he was best suited to continue his learning at WCC’s Denver, Colorado program location at the Marcus Institute for Brain Health, University of Colorado Anschutz Medical Campus, where he spends his days learning and training with Service Members and Veterans who have traumatic brain injuries (TBI). On-site training has been suspended due to the COVID-19 pandemic but Andrew and other service dogs at MIBH are still participating in virtual classes online.

Pat says students know Andrew moved on to train for a greater purpose, yet he made such an impact on them in the brief time he was there, that’s why they decided to include him as a highlight in their yearbook.

“Everyone at the school knew of Andrew,” said Pat. “He was in our classroom, could be seen walking up and down the hallways by my side, at recess and at dismissal each day. He was so happy, well-mannered and lovable, and he managed to reach the hearts of everyone he met.”