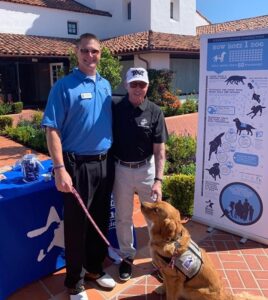 “If WCC had a Dogfather, it would be Tom Callinan,” says Rick Yount, founder and executive director, Warrior Canine Connection.

Tom Callinan (pictured in the photo on the righthand side), President of Pacific Union Development Company, served in Vietnam as a Captain in the United States Marine Corps. He championed this No-Fail mission from the beginning and has played a significant role in our success.

In fact, Tom helped secure the seed money to initially launch Rick’s idea with a pilot program at the Palo Alto VA’s Trauma Recovery Program in 2008. He serves on WCC’s Board of Advisors and has inspired many of his friends and colleagues to support WCC’s mission. From putting WCC staff up in his beautiful San Francisco hotel to arranging an incredible retreat for its Veterans at his camp near Lake Tahoe, Tom steps up in front to support the mission time and time again.

“Ever since I met Tom nearly 15 years ago, it’s been evident that he has his fellow Veterans at heart,” said Rick. “He’s been quite the advocate for WCC from the beginning; I really credit him for launching our program. Helping Veterans is personal to him and that comes through in everything he does. He’s such a good-hearted guy, and I am proud to call him a friend and mentor.”

With roots in San Francisco, Tom has been influential in establishing programs such as WCC’s site at the Menlo Park VA and the organization’s new partnership with Swords to Plowshares at the Presidio.

In fact, the America’s Heroes Charity Golf Tournament, hosted by the Naval Postgraduate School Foundation, one of the key annual fundraising events WCC has participated in for the past five years, has raised close to $1M for the nonprofit. And with Tom’s role… he made that happen. The tournament, coupled with other fundraisers in California, play a significant role in supporting WCC’s California operations.

Tom traces his connection to the organization back to meeting Rick and Molly at the Assistance Dog Institute before WCC was formed — well over a decade ago.

“I am such an advocate of WCC’s program because it really works,” said Tom. “The service dogs are a drug-free alternative to therapy. They teach the Veterans patience through the training and help with so many facets of their reintegration into society. They work well.”

You may be familiar with WCC’s Calli, who is Tom’s namesake. He and his wife, Marj, are proud to have WCC’s Howard under their roof as well.

“I have got to hand it to Rick and Molly, they’ve done a fabulous job,” said Tom.