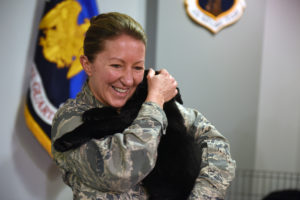 Despite the tens of billions of dollars being spent on Veteran health care, many Veterans continue to suffer from post-traumatic stress disorder (PTSD) and traumatic brain injuries (TBI). In a 2011 editorial in the Journal of the America Medical Association, military medical researcher, Charles Hoge M.D., summed up the efficacy of combat PTSD care, “With only 50% of Veterans seeking care and a 40% recovery rate, current strategies will effectively reach no more and 20% of all veterans needing PTSD care.”

Maj. Gary Wynn, a PTSD research psychiatrist at the Uniformed Services University of Health Sciences in Bethesda, Maryland, has called for a mandate to focus on keeping veterans in treatment by better matching therapies to patient preference.

The use of animal assisted therapy has been increasingly utilized for a variety of pain and mental health issues. Animal Assisted Therapy (AAT), especially with dogs, may be well-suited to attract and retain treatment-resistant PTSD patients and enhance outcomes from conventional treatment programs. A survey of pet ownership among military found that, despite the burden of frequent relocation and occasional quarantine periods, the U.S. military community is committed to the human-animal bond.  Military families share their homes with more than 400,000 pets. A survey of 896 military families found that 98% considered their pets to be members of their family.

In 2011, Rick Yount created WCC to support and expand our unique AAT model to support the treatment of service members with traumatic combat injuries at the National Intrepid Center of Excellence (NICoE). Hundreds of NICoE patients volunteer for WCC’s Mission Based Trauma Recovery Program (MBTR), a meaningful and challenging mission of training a young service dog for a fellow Veteran in-need.

Disturbed trust is commonly encountered in cases of PTSD and, in a recent study, soldiers cited a general lack of trust in mental health professionals as their key reason for treatment drop-out.5  WCC’s program takes therapeutic advantage of the fact that even the most severely wounded Veteran can still form social bonds with dogs. WCC’s Labradors and Golden Retrievers are specially selected for a calm, sociable temperament that will make them reliable and valuable mobility service.

Anecdotal testimonies of MBTR’s effects on PTSD symptom reduction from patients, family members and caregivers received additional support from a recent five-year retroactive review (2012-2015) of MBTR at the Bethesda national military medical center. Analysis of MBTR’s trainer-reported evaluations was presented at a meeting at the National Institute of Health found that participants’ emotional, cognitive, and social competencies improved significantly between their first to their last session.

In 2014, The Uniformed Services University of Health Science Consortium for Health and Military Performance was awarded funding by the U.S. Army Medical Research and Materiel Command to conduct a randomized, (waitlist) controlled pilot study to investigate the acceptability, feasibility, and outcomes (psychological and behavioral) of participation in six one-hour MBTR sessions. Research participants were recruited from the DoD Outpatient Clinic (Psychiatry and Behavioral Health).
Over a period of three years, 29 volunteers completed this pilot study: 12 in the MBTR group and 17 in the Waitlist group.

Despite the burden of completing 2-3 hours of research requirements, program retention for MBTR was very high. Eleven of 12 SDTP participants completed all six one-hour training sessions. One person had to drop out due to a sudden health crisis.

MBTR’s stress-coping effects were reflected in cardiac measures taken during research sessions. These showed improvement in participants’ heart rate variability (HRV)—the heart’s ability to respond to and recover from stressful experiences. This key nervous system function has been shown to be dysregulated by PTSD. Participants’ HRV measures showed significant improvement within 10 minutes and at the end of the first and last MBTR sessions.  Attendance and retention in WCC’s program offer encouraging support for the acceptability of the MBTR model and the feasibility of offering it as adjunctive therapy in a clinic facility. Data from PTSD symptom scores are encouraging and currently being prepared for publication in late 2019 or early 2020.

WCC’s MBTR program is also the focus of a larger, longer, more in-depth study being conducted in Bethesda and at the National Intrepid Center of Excellence (NICoE). This study, also Congressionally funded, will look at the biopsychosocial effects 12 hours of MBTR on 220 participants with follow up measures at three months for possible long-term effects.

Over the last few years, four other studies investigated the impact of training service dogs on symptoms of combat-related PTSD. These studies focused on four different not-for-profit service dog organizations across the country that operate under individual program philosophies and practices. Despite the differences in the four programs and the protocols used to investigate them, all showed a reduction in PTSD symptoms.

These are indeed exciting, long-overdue times for research into the therapeutic potential of service dog training as a safe, effective, non-pharmaceutical intervention for the reduction of PTSD. Stay tuned!

A Passion for Service Is Your Dog Ready for Fireworks?
Scroll to top