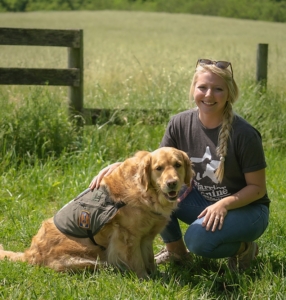 We are excited to welcome a new member to the WCC pack! Cathlene Kirkpatrick joined our team last month as a service dog training instructor based at our Healing Quarters in Boyds, Maryland.

Cathlene brings several years of service dog training experience with her; she worked at another nonprofit for five years before joining WCC, noting that she wanted to support Veterans and WCC’s No-Fail Mission.

Cathlene grew up in Atlanta, Georgia, and earned her bachelor’s degree in psychology from the University of North Georgia. She says she set out to be a veterinarian but changed her major to focus on animal-assisted therapy. However, during her studies, she concentrated her degree on canine-assisted therapy, focusing on canine cognition and assisting people with disabilities.

Military service runs in Cathlene’s family; both of her grandfathers served, one in the Army, the other in the Navy; her brother is a Navy Chief, and her brother-in-law is in the Marine Corps.

In fact, it was while Cathlene was in high school that her brother, Michael, deployed to Afghanistan, that she says she fully understood the sacrifices and service our members of the military make. As a result, she became very passionate about finding ways to support our Veterans and their care and is thrilled to have joined the WCC team in May.

“It’s been a lot to take in, but I already love all the dogs, they’re incredibly well-bred, and I love the dedication all the Puppy Parents have — it’s really nice to see that,” said Cathlene. “Even though we’re ultimately training the dogs to serve a Veteran, they’re already having an impact through MBTR during the process. That’s very much what drew me in.”

Besides being new to WCC and the state of Maryland, Cathlene was also recently married (March) to her husband, Kevin. So Cathlene will be “Cathlene Holloran” in a couple of months after all the paperwork is finalized. They’re both dog lovers and have a Lab-Golden cross named Pax, 6.

When not working, Cathlene enjoys cooking (Italian is her favorite), gardening, and photography (especially taking photos of dogs).