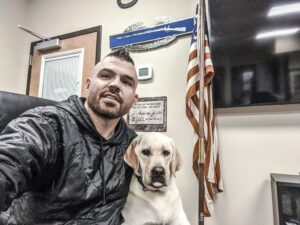 If you’re looking for Danny Farrar, it’s likely you’ll find him at one of his 14 SOLDIERFIT gyms. He opened the string of gyms with his first location a little over a decade ago. In addition to Danny, you’ll likely see his service dog Eli, a yellow Lab from WCC’s Welcome Home Litter who is his trusty confidant and is usually within arm’s reach.

Besides a businessman and exercise aficionado, Danny is also an Army Veteran; he enlisted in the Army and served eight years before separating from service. During that time, he worked as an infantry paratrooper in Fort Bragg; he then commanded drill cannons at the Arlington Cemetery; then he deployed to Baghdad, Iraq, where he spent seven-plus months performing more than 800 convoy missions.

Danny will tell you his life post-military wasn’t what he had anticipated.

“I ended up going into the private sector and got fired from my first job out of the Army which, ironically, was selling gym memberships,” says Danny. “I ended up evicted, was homeless, went through a divorce, attempted suicide, spent three days in the psych ward and decided it was time to turn my life around.”

And turn it around did he ever. First stop: The Fire Academy, where Danny graduated at the top of his class. Loving the physical challenge that it brought, he soon after became a certified personal trainer and began slowly building his own clientele. It took some time but that’s how SOLDIERFIT came about.

It was at a class one day that Susan, a WCC puppy parent, brought one of the service dogs in training into the gym. Danny, who had previously had a pit bull named Courage, chatted with Susan and then got serious about getting his own service dog.

“At the initial training, I was first drawn to Manion because I had so much overlap in my life with his namesake Travis, but Eli and I really clicked,” said Danny. “It’s kind of nutty how well the team at WCC know what they’re doing and can read which dog pairs perfectly with each Veteran. Eli is a funny cat who has his own personality, and at the house it’s a running debate over whether he’s my dog or the girls’.”

Danny is happily married to wife Jen. Together, they have two beautiful daughters, River Lynne, 4, and Willow Wynn, 1.

“I have managed to be successful but there are still things I still don’t really like, like going out… crowds… and Eli really helps me with that,” said Danny. “I didn’t want to get trapped in those situations, I wanted to be there for my family, and we’ve worked together to accomplish that. The beautiful thing is, I don’t even realize I’m using him sometimes when I am. He can detect that I’m getting riled up before I am… it’s kind of like four-legged medicine.”

In his line of work, Danny’s used to providing his clients advice and tough love. His advice for fellow Veterans who may be able to benefit from a service dog but are reluctant to explore it?

“At the end of the day, there’s no such thing as who needs it [service dog] more or who needs it less,” says Danny. “A need is a need. I think a lot of Veterans are bad with this and tough on themselves — they push off getting themselves help because they think someone else had it worse than them. There’s no justification for letting yourself struggle when help is available.”

While Danny and Eli were paired in January of this year, they will officially graduate as part of WCC’s 2020 graduation class.