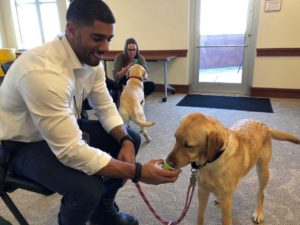 “Being a Veteran, I understand the difficulties of transitioning from military life to civilian life,” says Ryan. “It’s difficult as-is and to add a layer of PTS, TBI or a physical disability adds another difficult challenge to the mix. I wanted to give back to my own community — there’s a definite need among Veterans. People see the coming and going to and from deployment but the transition back to civilian life is really hard.”

Ryan became a puppy parent to service dog in training, yellow Labrador Retriever Joseph. The two hit it off immediately, along with Ryan’s chocolate Lab, Jackson.

“There was water splashed all over my house, lots of wrestling and some extra dog hair but we’ve both bonded with Joseph pretty quickly,” says Ryan. “Joseph is a really unique dog with a great personality. I’ve learned a lot during the service dog training process, and it’s helped shape how I treat my own dog, too. I’ve also learned from Joseph – to slow down, be patient and even how to communicate with my own dog better.”

Best of all, Ryan works on the Anschutz Medical Campus, where he serves as the Director of Pre-Award Contracting Services for the University of Colorado, so he’s within just a stone’s throw of regular puppy parent training sessions and other WCC-related needs.