“Even on a bad day, it’s hard not to look at Murphy and smile.” 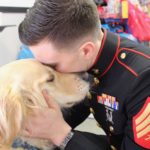 Seth says it’s hard to fully explain the difference WCC Military Family Support Dog Murphy has made in his life.

“I look at Murphy and (except when he gets into the cat’s food) generally just experience a feeling of happiness,” says Seth.

An engineer in the Marine Corps Reserves for six-plus years, including a year-long (2012-2013) deployment in Afghanistan, Seth says he compartmentalized a lot of things happening around him — to not let his emotions get in the way of him doing his job.

After he got home, he says he finally had time to go over everything that happened — the good and bad. Seth says he had some difficulty adjusting back to life outside of Afghanistan and that his body and brain were still in “deployment mode.”

He thought a dog might help. Seth applied for a companion dog through Warrior Canine Connection and was matched with Murphy, a Golden Retriever from the Valor Litter, who has since become his best friend and constant companion.

“Having Murphy around has made it gradually easier for me to be more open about what I experienced, which has been really cathartic in helping me move on from my deployment/time in the Marine Corps,” says Seth. “Murphy serves as a constant reminder of what is “good” in my life and has helped to keep a smile on my face when he was dealing with some of the negative things I had experienced. Even on a bad day, it’s hard to look at Murphy and not smile — he means so many things to me, it’s hard to put it in words.”