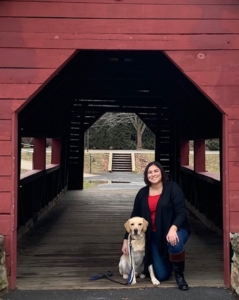 Eighteen service dogs from Warrior Canine Connection were placed with Veterans as part of its 2021 graduating class—its largest class to date. It’s an impressive number. But what may be even more impressive is WCC’s commitment to ensuring its dogs are best suited for their roles.

What many don’t readily see at graduation are the dogs who go on to serve Veterans and their families in a different role. We often refer to them as “career-change” or “release” dogs. Words such as “flunky” or “failure” simply are not part of WCC’s vocabulary.

There often comes a point with each service dog-in-training when the question is asked, has this puppy reached his/her fullest potential (for the type of work we’re raising them for)? Sometimes that question comes up sooner than later. WCC trainers and puppy parents do their best to prepare these pups for future work as a service dog, but the day will come when it’s up to the dog to carry forward. And the truth is—not all will—and that’s okay.

“WCC takes a lot of pride in serving our Veterans but also ensuring the dogs are happy,” says Krista Vega, WCC puppy parent. “It really is about the overall health and well-being of the dogs, and I love that approach to it.”

Krista Vega had fostered dogs for other organizations in the past and got involved with WCC as a puppy parent in 2020. A total dog lover who has had Labs as pets in the past, she was excited about becoming a puppy parent.

She said one of the first lessons as a puppy parent was that there was no guarantee the dog she would help raise would become a service dog. Sure enough, six months into her puppy parent responsibilities, Subin, her dog, was career-changed. Krista says she had to remind herself that it was nothing she did, rather Subin had chosen another route—still helping a Veteran and his family, but in a different way—as a pet. (Photo of both to the right.)

“I just loved the care that was taken when he was career changed, and I knew I wanted to be a part of that for future dogs,” said Krista. “They [the WCC trainers] take special care to make sure the dogs are a match for the program—the decks are not stacked. Now, I get to see how happy Subin is with his military family. He has little humans in the house and playmates, and he’s just so happy. He provides companionship and love to his family, and it’s a joy to watch him thrive.”

Kevin Simpson, director of service dog training programs for WCC, says the nonprofit raises each dog with the future goal of being a service dog, but ultimately, the dogs choose their own careers.

“We aren’t raising robots here,” said Simpson. “All of these dogs have their own strengths, challenges, and personalities, which are all an integral part of their training and matching process. Some dogs may be released for a medical issue, others might be reactive, and still others might be better suited as a working detection dog, and for many—it’s being a pet—living out their days with the Veteran families. In the end, the dogs are happy and they bring joy to those they’re placed with. We like to say they’ve been ‘honorably discharged.’”

Simpson added, “We place high standards on the dogs we match as public-access service dogs. While some really enjoy working for and serving their Veteran, others are simply not meant for that role. It may be that they need more time adjusting to new environments and have trouble focusing on the needs of their handler. Some may simply have too low initiative or find themselves needing more support than they’re able to give. Other times it can be a health-related reason the dog is not meant for service work.”

Diane Cadenhead has had a hand in helping to raise seven WCC assistance dogs. WCC’s Charlie, one of the first dogs she was a puppy parent for, now provides tremendous support as a service dog for a Veteran and his family. It was the same story for WCC dog Judy. Both are public access dogs serving their Veterans. But not every dog she has parented has become a public access service dog. Diane has raised five career change dogs, one for medical reasons, the others by the puppy’s decision to better serve their veteran in a different capacity than a public access service dog.

“I work with WCC to interview puppy parents, and I can tell you that a career change is still a success,” said Diane. “We have a lot of Veterans. Not all have special needs or a disability, but all can benefit from these amazing dogs. Sometimes they go to a Veteran who might have a child who has a need who can benefit from a dog of this caliber. A career change is never a failure … every effort is made to ensure the dog goes on to serve a Veteran—just in a different capacity.”

Wendy Notari, a WCC service dog training instructor and a three-time puppy parent, has raised two dogs who have been released, and currently has a third pup.

“Every dog I know who has been released is living their best life,” said Wendy. “And that’s thanks to the puppy parents who have helped raise them. They put in the same amount of time, love, and dedication as those who raise pups who become service dogs. WCC truly sees each dog as an individual and strives to find the placement that best captures their personality, aptitudes, and connection to their new person or family—whether they’re placed as a service dog or a loving pet. You can’t ask for anything better than that.”