Warrior Canine Connection’s pack has grown! We are excited to introduce you to two new members of our team. 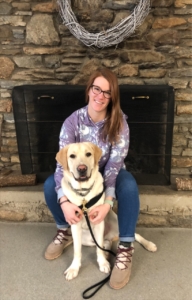 Michele Tate
Michele joined WCC in mid-November 2021 as a service dog training instructor at WCC’s program in Asheville, North Carolina. She has vast experience working with a wide variety of breeds and temperaments, as well as service and rescue organizations. In her role, she will oversee the puppy program and work closely with WCC’s highly valued puppy parents.

Michele graduated from the University of North Dakota with a bachelor’s degree in psychology. She then received her training at Starmark Dog Training Academy, where she specialized in task training and behavior modification.

Prior to coming to WCC, Michele spent four years working with service dogs and Veterans, so this is not new territory to her. She says the military population is one she’s always been interested in supporting, as she has a partner who is a Veteran and family members who are Veterans and active-duty Service Members.

“It’s been amazing to see how quickly WCC’s purpose-bred dogs pick up on skills, how calm and easy going they are,” said Michele. “Of course, they have well-rounded lives with puppy parents, exposure to people, sounds, and other stimuli from the time they’re only a few weeks old and then formalized training … but it’s been magical to watch that come together.”

Michele has two dogs, Brin and Red, and when not at WCC, she enjoys swimming, riding her bike, cooking, and reading. 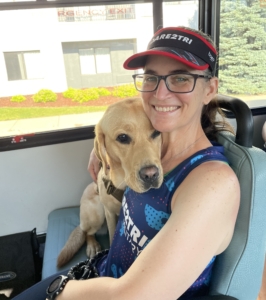 In late November, we also welcomed Suzanne Brown as a service dog training instructor who will work in a part-time capacity at our Healing Quarters in Boyds, Maryland. Suzanne graduated from the Coast Guard Academy with a bachelor’s in Naval Architecture & Marine Engineering, and she earned advanced engineering degrees at the University of Michigan. She served over 25 years active duty in the U.S. Coast Guard before retiring as a Captain in 2020.

Suzanne has volunteered at WCC for the past few years and served in almost every volunteer role from whelping/puppy watcher to puppy parent and she helped coordinate WCC’s Inaugural Ruff Mutter event.

“I came to know WCC at a really rough time in my life and they really helped me through that,” says Suzanne. “I have seen firsthand the impact that working with the dogs has as well as the difference a service dog can make on a Veteran’s life. WCC’s programs, both the placement of service dogs and utilizing military members and Veterans to help train the service dogs in training, have not only helped me but so many military members and Veterans in their recovery process. Those invisible wounds are real and it’s hard to explain but the dogs have such a tremendously positive impact. I came in at the right time, and now I want to actively help others through WCC’s mission.”

Outside of work, Suzanne enjoys spending time with Baxter, her 14-year-old pet Golden Retriever. Suzanne also used to compete in triathlons and says she is focusing on becoming more active. Suzanne is also a volunteer coach for adaptive/para-swimming and triathlons.