Army Veteran Sandy Wilson and husband Nick have lived in their current neighborhood for 25 years. It wasn’t until last year that Sandy got to know her neighbors. That’s when she was paired with her service dog Barb, and they began walking together every morning. 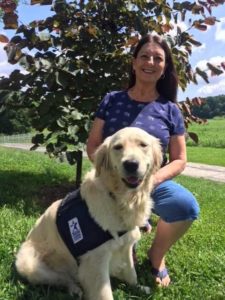 During one walk, a neighbor nicknamed Barb “Sugar-Coated Angel,” and Sandy says it has stuck. A Golden Retriever, Barb has a beautiful, long white coat. Not just that, Sandy says she’s been a true angel in her life.

Trained as Military Police (MP) at Fort McClellan, Alabama (which has since closed), Sandy took the opportunity to participate in One Station Unit Training, where she graduated second in her Company. In fact, Sandy was one of the first women to train and graduate as a combat MP in the ‘70s.

After serving at Fort Bragg with the 65th MP Company, Sandy then joined the National Guard and served with the 29th Light Infantry Division at Fort Belvoir. During that same timeframe, she attended Northern Virginia Community College (NOVA) to study police science and trained loss prevention personnel for major retail companies — all while also raising a toddler.

Sandy took a break from law enforcement and passed her real estate broker’s exam in West Virginia and spent several years selling homes. She says some years passed between careers and there was no denying that she needed help from Veterans Affairs. A doctor recommended a service dog, so she applied for a dog through Warrior Canine Connection. The process took a little while, but Sandy says it was well worth it and that she couldn’t imagine a better match than she has in Barb.

“The career path I chose took its toll on me,” says Sandy. “It used to be hard to be in public and in large groups — and still sometimes is — but Barb has helped me release past pain. She has enhanced my life and my husband’s… I can’t imagine my life without her.”

Every day, their routine is to spend some time training together so Barb will be prepared for next year’s public access test (it’s annual test to evaluate and ensure all service dogs remain compliant with the skills and techniques required for public access). Sandy says Barb loves her training time, because “there’s lots of treats and hugs for a job well done.”

Barb also enjoys spending lots of time with Sandy and Nick’s daughter and her husband, Nicole and Mike, and their granddaughter, Tori, along with their dog, Jake. Barb and Jake have become fast friends and can often be found enjoying the outdoors together.

Since becoming a team last year, Sandy says her “Sugar-Coated Angel” has helped her spark many a conversation, open many other doors and, generally, has just made life much *sweeter* overall.