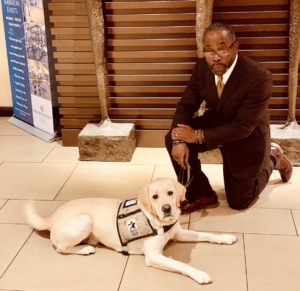 Rabb enlisted in the Marine Corps at the age of 17 and served four years active duty before being discharged from the service as an O311 Infantryman (E-5). From there, he went on to earn his bachelor’s (Illinois State University) and master’s degrees (University of Chicago).

After a 10-year break in service, in 1985 Rabb returned to the military as a licensed clinical social worker for the VA and the U.S. Army and Army Reserves.

Achievement after achievement.  And then in 2015, life changed: Rabb had a massive stroke and was unconscious in the ICU for a week. The doctors told his wife, Kim, he had a seven-percent survival rate. But Rabb didn’t get the memo.

“I, essentially, had to learn everything all over again. I spent a ton of time in rehab. That was tough for me—a huge role reversal for me—there I was, relying solely on others,” said Rabb.

Rabb says he wouldn’t be where he is today without the love and care from all those who helped him—from the hospital and rehabilitation staff to his wife, Kim, and his caring family. And as of 2017, WCC’s Gunny Quail, Rabb’s service dog—a doting yellow Lab.

“Our relationship has evolved—it’s dynamic, it’s beautiful, it’s centering, it’s fun, it’s sharing, it’s a lot of love, and it’s a lot of learning about each other,” says Rabb. “We explore the world together … it’s nice to have a partner; he helps me, he centers, and he helps ground me.”

Rabb and Quail, who he nicknamed “Gunny,” as a nod to his service in the Marine Corps, graduated as part of Warrior Canine Connection’s class of 2019.

Rabb had met Rick Yount, WCC founder and executive director, many years earlier at the Palo Alto VA, and he reached out all those years later to get involved in WCC’s service dog training program.

The two can be found together just about everywhere. In April, Rabb and Gunny Quail joined other Minnesotans outside in a memorial gathering during George Floyd’s memorial.  Many others assembled around them, drawn in at the site of an adorable yellow Lab, who Rabb says brought calm and joy during a dark and tense time.

“He [Gunny] engages … a lot of people who want to pet him—people just want to touch him and connect,” said Rabb. “He creates safe spaces. It offers an opportunity to reach out and really connect with the world.”

Rabb and Gunny Quail can be found together during their daily walks or side-by-side while the Colonel works on his poetry, a hobby for which he’s won several awards. Together, they tackle whatever comes their way.

“Well, with Gunny, what makes things better is that there are no worries,” said Rabb. “We’re in sync. We’re on a mission together.”