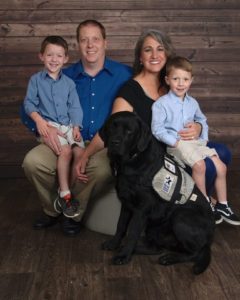 Ryan Garrison is many things to many people. He’s a husband to beloved wife, Julie. A father of two. Retired U.S. Air Force Staff Sergeant E5. And most recently, a college graduate; this spring, Ryan completed his degree in organizational leadership from Wright State University. And soon, he will be the president of a nonprofit he’s launching to help Veterans like himself.

Ryan Garrison enlisted in the U.S. Air Force right after watching the Twin Towers fall on 9/11. He was a self-described “floundering” fifth-year senior in college working on his third major at the time and was planning on joining the Reserves, but that fateful day compelled him to change his course. He dropped out of school to enlist in the Air Force, where he served until 2016, including three deployments.

Ryan comes from a family steeped in military tradition: his grandfather was in World War II; his other grandfather — Vietnam; his brother is a Master Sergeant E7 in the Air Force; his uncles and cousins have all served in different branches of the Armed Forces. So, the career move felt like a natural fit for Ryan, only it was shorter lived than originally planned.

In 2006, Ryan was in Iraq working on the flight line. He was working on the K-loader, essentially a cargo lift, and while inspecting the load, a sheep farmer who had been paid by local insurgents, ran up and shot an RPG over the fence, which hit the K-loader and the blast was so hard, it blew Ryan off the vehicle. He sustained serious injuries, including fractured and torn disks in his back, which have resulted in numerous surgeries, chronic pain and anxiety.

His wife, Julie, who, at the time, was a music therapist at the National Intrepid Center of Excellence (NICoE), suggested Ryan explore getting a service dog. Ryan says he saw fellow Veterans there helping to train service dogs, as well as how WCC service dog Cadence had impacted his friend Rod and his family for the better, so he decided to apply for a dog through WCC.

“I wanted to find another way to deal with the issues I was going through, so I learned a lot about the service dog program,” said Ryan. “I learned all I could, but it wasn’t until I witnessed others with the dogs firsthand that I really realized their power.”

Enter Luke, a handsome black Lab and trained mobility service dog. He was paired with Ryan in 2016 and the two have been virtually inseparable ever since.

“I really can’t say enough about what Warrior Canine Connection and my service dog Luke have done for me,” said Ryan. “Thanks to Luke, my anxiety is under control, I’ve significantly decreased the medication I take, and he’s really helped me with my mobility. It’s not just that though — since being matched with Luke, I have a whole different outlook on life — a positive one.”

Garrison’s wife, Julie, couldn’t agree more. She says Luke isn’t just man’s best friend, but a member of their family, and that their two sons, Mitchell and Maxwell, simply adore him.

“He’s [Luke] just like one of my children… sometimes it’s a toss–up for who listens the best, sometimes it’s Luke, somethings it’s Mitchell, and sometimes it’s Maxwell,” said Julie. “Although, as great as he is, I don’t always trust him with unsupervised food (laughter). His [Ryan’s] dry wit that I fell in love with years ago has returned. It’s just joyful now — because of that soft presence of Luke.”

In fact, Ryan says his experience with Luke and Warrior Canine Connection partially inspired his next challenge — Valor Therapeutics, a nonprofit he and Julie will soon be launching to serve active duty Service Members, Veterans and first responders in Dayton, Ohio and the surrounding area. They plan to provide alternative forms of therapy to individuals who’ve seen and experienced trauma, such as music, art and movement therapies.

“I was inspired by my experience with Warrior Canine Connection,” said Ryan. “To receive a service dog at no cost to me, with no expectations of me and it was a stress-free process… we want to provide something similar to Veterans through our nonprofit.”

Ryan adds that he one day hopes to add a therapy dog to the offerings that Valor Therapeutics will provide.