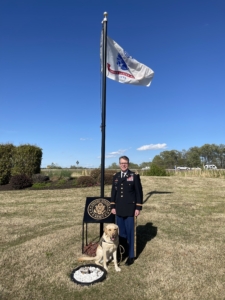 This May, the U.S. Army Officer Candidate School will honor 29 new members into its Hall of Fame. Colonel Ken Nance is among the list of those who will be inducted for this prestigious honor.

Annual inductions are based on accomplishments that include superior valorous combat leadership, superior meritorious service, as well as public- and life-long service to their community and nation. National notable members included in the OCS Hall of Fame are Bob Dole, former Senator from Kansas and presidential candidate; Winthrop Rockefeller, politician; Casper Weinberger, Secretary of Defense; General Tommy Franks, Central Command Commander; and Major Dick Winters from “Band of Brothers”.

Ken grew up in Tippah County, Mississippi, graduated from Falkner High School, then studied at both Mississippi State University and Western Illinois University. He went on to serve in both the Reserve and Active Components with almost 29 years of combined service, including five enlisted as a tank crewman and 24 as a commissioned Engineer Officer. Within that career, he had five combat deployments with almost four cumulative years in combat theaters.

“It’s an incredible honor and a culmination of this career that has helped shape me into who I am today,” said Ken Nance. “I didn’t want to retire, I honestly fought as hard as I could to stay in but due to my injury, I simply couldn’t perform any longer, so I retired five years early.”

During his most recent deployment to Afghanistan in 2017, Ken’s heart stopped causing him to lose consciousness. He fell a distance, broke his jaw, sustained a traumatic brain injury, and lost most of the use of his left foot. He spent more than eight months at Walter Reed National Military Medical Center undergoing four facial reconstruction surgeries, implanted prosthetic jaw and facial bones, lower leg nerve surgery, and receiving an implanted cardiac defibrillator (ICD). Ken then spent three months at the National Intrepid Center of Excellence (NICoE) trying to retrain his brain and body.

While at NICoE, the idea of a service dog was presented to him. Ken says it was an idea he had not even considered. “At that time, I was focused on full recovery and really did not even explore the idea. Little did I know at the time, what a valuable source of recovery a service dog could provide.”

Ken was later transferred to Fort Benning to continue therapy and medically retired from the Army in September 2019.

“I am still going through recovery,” said Ken. “It’s tough going from functioning at a senior level in the military accustomed to a high operational tempo to being dependent on my wife and my family in what seemed like the blink of an eye. It has been a difficult road; however, I am thankful for life. I know everyone’s life journey has difficulties, so it’s not to say mine is any more challenging.”

Ken’s name may be familiar to those in Warrior Canine Connection’s circle, as Ken has WCC’s Sully, a service dog who serves as a vital part of his continued recovery. The duo was paired in July 2020 and has been inseparable since.

“Sully makes a huge, huge difference,” said Ken. “He is with me all the time. I need stabilization assistance quite a bit, and of course, he’s a pretty big dog, so that’s one of his strong suits. Sully very quickly learned my routines, so he knows both my normal routine and my mannerisms. He senses if I’m even needing assistance and before I even make the command, ‘brace’ he’s in position ready to brace; it’s like he’s reading my mind.”

Sully has made himself quite comfortable at the Nance household and has brought a lot of joy to Ken and his family’s lives. Their home is on 20 acres outside Olive Branch, Miss., so Sully gets plenty of time to romp in the yard and the pond.

Even though time has passed, Ken says retired military life is still an ongoing adjustment. He recalls fondly the teamwork, mission focus, and ultimately serving this nation in a capacity that is bigger than oneself.

“It’s almost comical, the first three years of my enlistment, I was determined I would get out at the end of my initial term,” said Ken. “Ironically, twenty-nine years later, I was pushing with determination to stay in!”

It was the Army that provided the structure, education and challenges that Ken craved—and it’s where he excelled.

“The Army assisted me with completing both a bachelor’s and master’s degrees,” said Ken. “It gave me leadership opportunities and surrounded me with the best of the best from American society— those willing to serve our great nation.”

Despite his detoured career and daily challenges, Ken is thankful for all the Army gave him, and he’s honored for his upcoming OCS Hall of Fame induction.

This year’s induction ceremony will take place at Fort Benning on May 17.

Please join us in congratulating Ken on this tremendous honor!