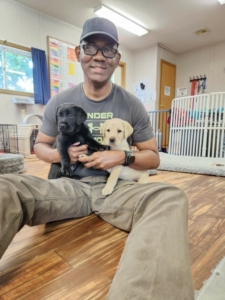 Military service is a family tradition for Retired U.S. Army Sergeant Mike Milton; his brother, sister-in-law, cousin, and uncles, all served in the Armed Forces.

“I joined to be of service to country,” says Milton. “I had amazing experiences that included people, travel, and lots of different situations—both good and bad—they were instrumental in getting me where I am today.”

He enlisted in 2008 and served as an infantryman through 2016. During a physical fitness training event, a muscle breakdown led to a debilitating kidney injury. Milton spent four-plus months at Walter Reed National Military Medical Center undergoing dialysis treatment. He would spend 18 additional months undergoing outpatient treatment there before medically retiring in 2018.

“While at Walter Reed, I attended a few events and enjoyed socializing with other Warriors through the Wounded Warrior Project (WWP),” said Milton. “I didn’t anticipate retiring so early and wasn’t sure what was next for me, and they really helped me through some difficult times.”

After medically retiring from the Army, Milton enrolled in the Operation Warfighter Program, the Department of Defense’s internship, which helped position him for his current role as a Safety and Occupation Health Specialist with the U.S. Army Combat Capabilities Development Command Army Research Laboratory Safety Office.

He also continued attending WWP events. It was at one of those later events that Milton encountered a service dog in training who was part of Warrior Canine Connection’s (WCC) Mission Based Trauma Recovery (MBTR) training program. A dog lover, he volunteered for WCC’s 8-week MBTR program, where he helped train a service dog for a fellow Warrior.

During the program, Service Members and Veterans in their own recovery help train service dogs for their fellow Warriors. By doing so, they receive their own therapeutic benefit from skills development in communication, self-esteem building, accountability, and emotional regulation. They also learn patience when they perform acts of service for others.

“It was great to give my own time to part of the program,” said Milton. “Dogs are very smart, and they appreciate the interaction, and the instructors were a joy to work with.”

Just happy to volunteer his time, what Milton didn’t expect was that he would benefit from the sessions himself.

“I went through a whole bout of sciatica with a lot of pain,” said Milton. “It took me an hour to drive to get to the training location but working with the dogs was relaxing to me and calmed me down. I didn’t think about world events or work or my sciatica … I was so focused, yet peaceful.”

His advice to other Veterans who are struggling or just want to connect with other Warriors?

Milton said, “Reach out to WWP or WCC. They’re good people. They’ve been there, done that and aren’t going to leave you hanging.”

If you would like to learn more about how you can get involved in WCC’s MBTR program, click here.