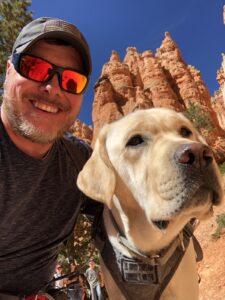 When Ryan Boyles was first paired with Warrior Canine Connection service dog Tommy II and saw that they shared the same birthdate—April 30—he says he felt like their new partnership was fate.

“I felt like it was meant to be, and then they brought him in, and I fell in love with him immediately,” said Ryan.

The duo graduated as part of WCC’s class of 2019, and since that time, the two have been inseparable.

“Tommy has given me my freedom back to go and do stuff outside of my home and with my family,” said Ryan. “I really struggle with crowds and feeling trapped, and Tommy really helps me out with that. Thanks to him, I’ve been able to travel with my wife and boys and I feel more comfortable in many different situations. I used to not be a pleasant person to be around. He helps to calm me and bring balance to my life. My wife has told me she noticed an immediate difference in my temperament once I got Tommy.”

Ryan enlisted in the Air Force in 2006 out of a passion to serve and tradition: both of his grandfathers served in World War II, his uncle was also in the service, and Ryan says he felt a strong pull to serve as a result of 9/11.

Ryan served in the Air Force for nine years working in multiple roles, including support of combat search and rescue and contingency response missions, before being honorably discharged as a Staff Sergeant (E5) in 2015.

During his service, he completed multiple deployments, including stations in Djibouti and Uganda, Africa. It was during those missions when Ryan was serving as a paying agent that he was put into situations that forever changed him. As a result of his service, Ryan sustained various knee, hip and back injuries, and he also suffers from post-traumatic stress disorder (PTSD), anxiety and depression.

“I used to have really bad nightmares to the point where I would wake up yelling, screaming and punching,” said Ryan. “As soon as I got Tommy—literally the day I got him—my nightmares subsided. I rarely ever get them now. He doesn’t have to be in our bed. His presence in our room next to our bed just helps me sleep.”

Tommy hasn’t just helped with Ryan’s peace of mind, he’s brought so much joy to his family, especially his sons, Lincoln, 11, and Greyson, 8.

“When the vest comes off, Tommy’s their best bud; the boys enjoy playing with his toys and taking him for walks. It took a little while for them to understand he was my service animal. They understand it and respect it, but they definitely enjoy their playtime with him.”

Perhaps most importantly, Tommy has also instilled Ryan’s hope for the future; he is able to continue traveling with his family and feeling the sense of freedom that Tommy affords him.  He’s also looking forward to many more joint birthday celebrations with Tommy.