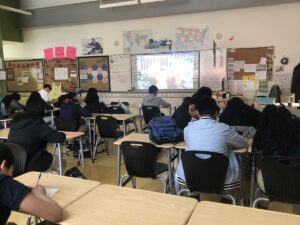 “Is this leaked footage from heaven?” That’s what Jon, one of Kayla Iannuccilli’s eight graders, asked her after seeing the Warrior Canine Connection puppy cam on Explore.org for the first time.

Kayla teaches language arts to 7th and 8th graders at East Rock Community & Cultural Studies Magnet School in New Haven, Connecticut, where she’s worked for the past six years. She’s one of those teachers who makes an impression on her students — tough but fair, yet also creative and fun.

“On days when we’re not using our board in class for lessons or presentations, I’ll put up one of Explore.org’s live feeds,” said Kayla. “I’ve checked out a few different feeds before, but the Warrior Canine Connection feed is the best!”

And her students couldn’t agree more.

“It calms me down and it’s just adorable,” said Terry.

Josh says, “I think it’s awesome because the veterans can have a friend.”

“I think it’s nice because it’s cool knowing how they train the puppies,” added Miguel.

While watching the puppy cam is a treat for students, it’s also resulted in healthy discussions about our military and the importance of training service dogs to help them with visible and invisible wounds.

Kayla says there are always lots of “oohs” and “ahhs” when the feed goes on, and the students see the puppies romping and playing.

“The kids love the puppies so much! I usually share the puppy feed with my 8th graders on Fridays, when they take their weekly quiz,” said Kayla. “Admittedly, it can be pretty distracting. The feed with the smallest puppies in the whelping room is usually our best option, especially when they’re sleeping.”

If you’re not familiar with the 24-hour, live puppy cam, it first launched on Dog Bless You on Explore.org in 2012. At the time, the livestream was a novel idea, but since then millions of people have tuned in to watch the development and adorable antics of WCC’s future service dogs.

Want to check it out? You can view the WCC puppy cam here.