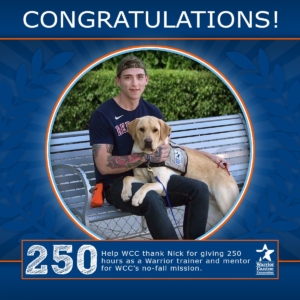 Since he was a kid, Nick has always loved art—painting, drawing, and he even did some professional tattoo work for a period. He loves finding beauty in unexpected places. And dog training is one of them.

“It’s one of the best therapeutic methods I’ve ever encountered, and I’ve tried a lot of different things,” said Nick. “I’ve tried horticulture, sitting with therapists and psychiatrists, which I still do, but I really prefer going to see the dogs.”

Nick enlisted in the Marine Corps and went to boot camp at age 17. Originally, he wanted to be an aircraft mechanic but soon found out he was color blind. He was drawn to journalism and photography and ended up attending the Defense Information School.

“I wouldn’t trade the experience for the world,” says Nick. “I got to see parts of every other job, covered amazing stories, saw a lot of interesting things, and learned a lot from a lot of people through the Marine Corps. I also really valued the camaraderie.”

Three and a half years into his service, his diagnosis restricted him from being able to re-enlist and he sought treatment.

“I don’t know what I’d do without the VA, honestly,” said Nick. “They help me with medication and really everything … they’ve been a huge help to me.”

It was through the VA’s programs that Nick learned about WCC’s service dog training program. Once he got started, he was hooked.

“I set a goal to complete 100 sessions, then 150, and then 200,” said Nick. “Truth is, I don’t see myself stopping, I enjoy the sessions so much, and it’s helped me immensely with my anxiety and with learning about myself. I have also learned a lot about how to talk to the dogs, handle them, and training in general. Both you and the dog benefit so much when you know how to communicate with each other.”

Nick balances the training sessions with his schoolwork; he’s studying business management at Asheville-Buncombe Community College, where he says he hopes to learn to one day combine his business skills with his passion for art.

Amy Guidash, who runs WCC’s program in Asheville, says “Nick has come a long way since he started the program. He’s been so committed to it, that not only has he learned a lot about training and formed amazing relationships with the dogs, he’s also become a great resource and help to his fellow Veterans who are new to the program.”

“When I first started, I was uncomfortable and wanted to stop,” said Nick. “My advice to others is to dip your toe in the pool … get outside of your comfort zone a bit, keep fighting to stay and it will get more comfortable. Talk to people, make friends, and bond with people in the program who have close to or some of the same experiences as you, so you are never alone.”

Nick, who works a lot with WCC’s service dog in training, Danny, says he hopes to one day get his own service dog.

“Dogs are powerful—knowing you have something living and breathing next to you, it’s true companionship,” said Nick. “They don’t judge you for anything at all. And they just have playful and compassionate souls … they look to you to help with a lot of things, too.”