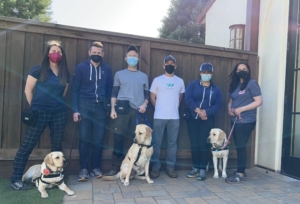 What do developing autonomous vehicles and training service dogs have in common? More than you might think! Before we dive into this unlikely comparison, let’s provide some context.

John’s work at Waymo allowed him to combine both interests, as he and fellow Veterans at the company recently gathered to host a community clean-up day – WCC’s Nathan and other WCC service dogs in training participated. The Veterans at Waymo employee resource group supports and builds community among veterans working at Waymo, including with volunteer opportunities like this one.

“There’s something about how dogs give you their undivided attention and love that is so powerful,” said John. “During my day, so many things pull on my attention and I feel like I’m always multitasking. But Nathan treats me like I’m the only other person in the world—I feel like no other animal or person has that capacity.”

John studied physics at University of Illinois for undergrad, after which he commissioned into the U.S. Navy. He spent four years at the Naval Nuclear Power School, teaching the principles of nuclear power plant operation on submarines and aircraft carriers to Navy sailors. Next, John transitioned to the Navy Reserve to pursue his Ph.D. at Stanford.

It was there he learned about Stanford’s partnership with WCC and got involved in its Mission Based Trauma Recovery (MBTR) program for Veterans. Essentially, those involved help train service dogs for their fellow Service Members and Veterans, which fulfills a time-honored military tradition of Warriors helping Warriors. In doing so, the Veteran can also benefit from social and emotional skill development, improved communication, confidence building, reduced isolation, improved emotional regulation, and reduced stress, which many of the Stanford student Veterans greatly benefit from.

From September 2019 through July 2021, John volunteered in a total of 53 MBTR sessions while working on his doctorate. Not only that, he and his wife, Ashley Fabrizio, also helped with puppy sitting needs, followed by becoming Puppy Parents to WCC’s Nathan, who recently graduated to advanced training at WCC’s Healing Quarters in Boyds, Maryland.

Onto comparing autonomously driven vehicles and service dogs: As John can tell you, the fundamentals involve training the dogs to do the things we want them to do through rewards, like attention and treats. They don’t receive rewards for behaviors we don’t want, and they quickly learn to optimize for these incentives.

“That is fundamentally similar to the way autonomous vehicles can be encouraged to do what we want them to,” said John. “We don’t need to give them treats; they’re even easier to please! By defining a mathematical reward function, we can assign points to behaviors we want or don’t want – positive rewards for good things like staying in-lane, and negative rewards (penalties) for things to avoid like lingering too long on a crosswalk. The algorithm solves this math problem over and over again to figure out how to get the most rewards and avoid the most penalties.”

This is where things get complicated … John added, “because we need to describe complex things both to our dogs and our autonomous driver, not just put your paw on the ground or stay between the lane lines. Dogs don’t understand math, but they can be taught some human language and they understand feelings like good, bad, happy, or lonely. Our cars are better at math, but it’s challenging to describe all the things they need to know with hand-tuned rewards. These less tangible things can be encoded with neural networks, which are a mathematical way to describe things like other drivers’ behavior or how to recognize street signs.”

John explains, “Nathan’s learning process may be similar to training a neural network. We can’t describe to him exactly what behaviors we want. We use commands; he kind of speaks our language that way, but we can’t use full sentences to say precisely what it means to heel or sit close to his handler. Rather, we teach Nathan complex tasks slowly and iteratively, adding one component or adjustment at a time until he learns the whole sequence. I feel like there’s a real similarity there, for things that are impossible to explicitly communicate to both Nathan and a car.”

Simply put, for service dogs and autonomous drivers, it pays to make the right decisions! We get more of the behaviors we reward with both cars and dogs. It’s pretty remarkable to realize how certain aspects of learning theory are not only similar across species, but even in the development of artificial intelligence. That said, an autonomous driver is never going to be as good at snuggling as your dog.