Warrior Canine Connection’s programs continue to see growth, both locally in nearby Frederick, Maryland, as well as at two new sites — one in Pennsylvania and another in Virginia.

November marked the official start of WCC’s new program at the University of Pennsylvania in collaboration with its Perelman School of Medicine and Veterans Care Excellence Program (VCEP). The program provides WCC’s Mission Based Trauma Recovery (MBTR) training program on campus for area Veteran students, staff and community members, and has five service dogs in training on site.

Also in November, roughly 20 miles from WCC’s Healing Quarters in Boyds, Platoon 22, a non-profit organization who mission is to end Veteran suicide opened the doors to its new Platoon Veteran Services Center at Goodwill in Frederick, Md. The space provides much-needed resources and support for Veterans transitioning from service to civilian life. WCC is offering its Mission Based Trauma Recovery (MBTR) programming on-site several days a week as one of its ongoing support programs.

In Virginia, WCC has begun working with the Rappahannock Regional Veterans Treatment Docket which is being held at the Spotsylvania Circuit Court in Northern Virginia. In support of this Veterans Treatment Court (VTC) programming, WCC is engaging Veterans in MBTR classes to satisfy community service hours—often a requirement for graduation from the court. The dog training — offered through WCC — is one of the options on the docket. Training takes place on a weekly basis at the courthouse and Veterans can ​participate within the WCC program for the duration of their VTC commitment. The program is in addition to WCC VTC programming taking place at locations in California, Maryland and North Carolina.

The event not only focused on honoring veterans, but also helping them recover from visible and invisible wounds. Watch the complete WLOS story here. 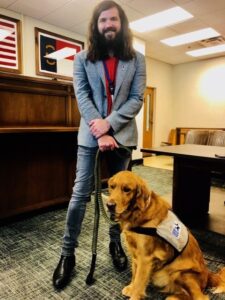