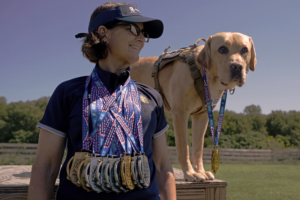 This year, Warrior Canine Connection (WCC) had one of its own participate in the Department of Defense’s annual “Warrior Games,” an athletic competition for Service Members and Veterans with visible and invisible wounds that is televised on ESPN. CAPT (Ret.) Suzanne Brown, who served in the United States Coast Guard for over 25 years and is now a Service Dog Training Instructor for WCC, had the opportunity to travel to Orlando for two weeks in August to compete. Suzanne was accompanied by her service dog, WCC’s Holli Ann, and came home with 10 medals and some wonderful stories to share.

“The overall experience was pretty amazing. It was amazing being around all the other wounded Warriors and seeing each other overcoming challenges whether they are physical or emotional,” said Suzanne. “I definitely made some new friends and even people who we were competing against, you become friends. Everyone is supporting each other. You want to win but it’s about supporting each other.”

While Suzanne participated in cycling, rowing, track, and swimming, she had a clear favorite.

“Swimming was my favorite by far. That’s my happy place. I’m very comfortable in the pool. It’s so great to be able to get back to swimming.” Suzanne credits Holli Ann for helping her feel comfortable in a pool again after her service. “It had been a number of years. Some of the struggles were just getting to a pool and being comfortable in that loud and crowded environment again. Holli Ann helped me because I had to focus on her instead of focusing on my fears. I had to focus on getting her used to the environment,” said Suzanne.

When Suzanne took Holli Ann with her to cheer on teammates in the rowing competition, it was Holli Ann who grabbed ESPN’s attention. “We were going to go cheer everyone else on. I had Holli Ann by my side and we went and stood right in the middle of the cheering section with all the people I knew in front of the rowers. Holli Ann was on ESPN because while we were cheering Holli Ann was licking everyone’s faces.”

Despite Holli Ann’s attempt to steal the spotlight, Suzanne was the star of the show, winning 10 total medals including three gold medals in swimming (50-meter freestyle, 100-meter freestyle and 50-meter backstroke) and four silver medals in track (200-meter sprint, 400-meter sprint, 800-meter race and 1500-meter race). Suzanne was also named the winner of the “Heart of the Team” Award.

Another aspect of the Warrior Games that Suzanne enjoyed was getting to know the other athletes. “I enjoyed the opportunities to hang out with the athletes in smaller groups.” It was a positive experience for Suzanne to interact with other Warriors who might have had similar or shared experiences. “It’s people that kind of get it. We are all there for our own reasons. Maybe different reasons but similar. That was probably the best experience.”

Holli Ann was able to enjoy the social scene, too, as she got to enjoy daily “puppacinos” from the coffee stand. “Holli Ann for sure ate better than I did. She got her treats and her pup cup every single day.”

The Warrior Games were an experience that Suzanne says she couldn’t have done without having Holli Ann by her side. “I don’t think I could have done it without her. I joked with someone that it is almost like you have this little safety bubble around you. It made me comfortable being around these new people. It was two weeks and some of the things we went to I would have never done by myself. Holli Ann was a trooper.”

Would Suzanne consider participating in future Warrior Games? “Only if I have Holli Ann with me.”