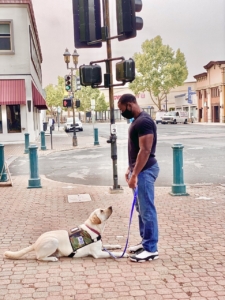 Tyreece Jacks spent four years in the Marine Corps. He enlisted as part of his master plan — get in, get out, and get an education. He completed his education, earning a B.S. in management, and several other credentials poising him for professional success. But he realized he missed his mission and connection to his fellow Marines, so he sought out a new way to support his fellow Veterans — by working with service dogs in training.

For two years now, Tyreece has been volunteering with Warrior Canine Connection by helping to train service dogs for his fellow Warriors. At first, he didn’t realize how impactful the role would be.

“I didn’t understand it initially … how these dogs were helping,” said Jacks. “But soon, just hanging out with the dogs, teaching them new things, and watching them grow, it’s a great experience. When you have things on your mind and hanging out with them, it’s a relief. You learn a lot about dogs and yourself in the process.”

Dogs he worked with whose names might be recognizable include WCC’s Arthur (pictured on the right), Walter, and Nathan. Tyreece built strong bonds with the dogs, especially Arthur, who he helped train since he was just a puppy, and who graduated as part of WCC’s Class of 2021.

“It’s amazing to see them grow, progress and learn, but it’s tough when they’re trained and it’s time for them to move on from the program,” said Jacks. “It’s emotional but it makes it better because you know they’re going on to do good. There are a lot of Veterans out there who need them. I work with a Veteran who has a service dog, and I see every day what he does for him and their relationship and know how powerful it is. And I feel good about that.”

Tyreece is now three months into his new role as a Veterans Outreach Coordinator, where he’s busy building a new website and helping other Veterans get involved in San Mateo County’s programs and get connected to local resources.

“Tyreece has been a pleasure to work with these past two years,” said Alexis Baker, program director and service dog training instructor for WCC’s California programs. “He’s observant, learns quickly, and is great with the dogs. He displays clear body language, is consistent, and good at training the dog in front of him, which is dog trainer speak for being empathetic and tailoring his style to the needs of the dog. All the dogs he’s worked with seem to enjoy him, too! He’s also been a good coach to newer Veterans who have joined our groups.”

When Alexis heard that Ed Kiryczun at the San Mateo County Veterans Services Office (CVSO), a valued WCC community partner, was looking for an Outreach Coordinator, she immediately thought of Tyreece.

Tyreece applied, interviewed, and got the job, where he’s already made his impact known.

“His desire to want to help veterans along with his firsthand experience in the Warrior Canine Program, makes him an ideal fit,” said Ed Kiryczun, CVSO. “He has an innate way of helping veterans feel at ease and connect with the Services and programs available to them,” said Ed Kiryczun.

We wish Tyreece continued success — professionally, personally, and as an outstanding WCC volunteer.

If you’re a Veteran and you need help with claims, using funds for college, or you want to find out what resources are available to you, contact the San Mateo CVSO at (650) 802-6598; they can help you at no cost to you.